Southeastern rolls to 31-6 win over Rangers 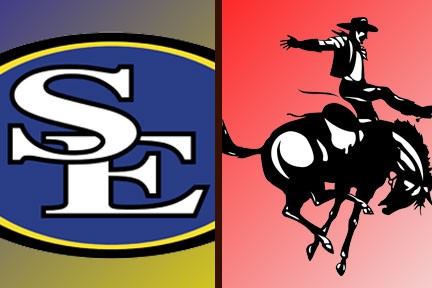 ALVA, Okla. – Southeastern turned in 292 yards on the ground while the defense kept Northwestern Oklahoma State off the board until the fourth quarter as the Savage Storm rolled to a 31- 6 win on Saturday afternoon in Alva, Okla.

SE snapped a four-game losing skid and improved to 2-4 on the season and will be back on the field on Oct. 20 when it hosts Southwestern Oklahoma State at 3 p.m. at Paul Laird Field.

The rushing attack has truly been a team effort on the year as the Storm saw its fourth different leading rusher in six weeks with Don Brown turning in 99 yards on 13 carries with one touchdown.

Ladarius Abrams followed up his season-best effort from last game with a respectable 83 yards on 16 carries with a pair of scores.

Quentin Morris turns in a rushing TD on his only carry of the day and is the fifth different player to score a rushing TD this season.

Bradley was held in check in the passing game, completing 7-of-19 through the air for 67 yards.  Morris caught two of those passes to lead a group of six players who recorded receptions.

The rushing effort was the second-best team performance this season behind the 336 posted one week prior against Arkansas Tech, however the 67 passing yards is the lowest output this season and marks the first time SE has been held below 100 yards throwing the ball since a 92 yard effort against Northeastern State during the 2006 season, a span of 58 games.

The Storm got on the board early when Abrams scored from six yards out with 10:19 to play in the first quarter to stake a 7-0 lead.

It would take just over a full quarter’s  worth of game time until SE got on the board again, but when it did it would be Abrams again scoring, this time from four yards out to cap a nine-play, 53 yard drive that gave the Storm a 14-0 lead with 9:22 to play in the first half.

Later in the quarter it would be a little trickery that extended the Southeastern lead to 21-0 as Morris would score on the reverse from 14 yards out to cap a seven-play, 42 yard drive that ate 2:53 off the clock.

The Storm would add one final score before the halftime break, taking advantage of a Ranger turnover and moving the ball 23 yards on six plays before Chris Peoples connected on a 24 yard field goal to give the Storm a 24-0 lead at intermission.

Brown would put his stamp on the game near the end of the third quarter with a 20 yard TD run that capped a 12-play, 70-yard drive that lasted 4:37 seconds and gave SE a 31-0 lead after three quarters of play.

NWOSU would finally get on the scoreboard with 3:19 to play in the contest when Jeremiah Carter would haul in a Kyle Jech pass for 60 yards and a touchdown.  The Rangers would try for two but a Jech pass would not find its mark and SE would hold on to win by the 31-6 final score.