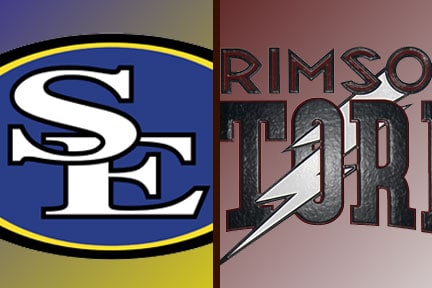 BETHANY – Southeastern set a school record with 421 yards on the ground en route to a 41-7 win over Southern Nazarene on Saturday night in Bethany, Okla.

The win evens the Savage Storm record at 2-2 on the year as well in Great American Conference play heading into a homecoming matchup with Southwestern Oklahoma State on Oct. 3 at 2 p.m. at Paul Laird Field.

Ronnie Green led a rushing attack that wrote its name in the SE record books with a combined 421 yards on 48 carries, averaging 8.8 yards per carry as a team with four rushing touchdowns.

Green turned in a career-best 143 yards rushing on just 10 carries to average 14.3 yards per carry with a long of 58 yards and a TD.

Three other running backs had at least 50 yards on the ground, while Ryan Polite finished with 46 yards rushing and a pair of rushing scores.

Nelson Akinwande turned in 85 yards on 12 carries, while Asanti McCrae chipped in   75 yards on six totes.

Devlon Wortham saw his first action since the season opener and added 56 yards on 10 carries which was enough to make him the fifth player in school history with more than 2,000 career rushing yards, moving his career total to 2,034.

Franky Okafor recorded the final rushing TD on his only carry of the night, a nine-yard end around.

Polite added 185 yards passing in the contest on 17-of-26 passing with a touchdown, bringing the team’s total offense number to 606 yards which was just 10 yards shy of matching SE’s record for total offense.

His TD went to Okafor who finished the game with 73 yards on four catches with the one receiving score.

Kaymon Farmer added four catches for 37 yards, while Chance Grayson, Green and Akinwande each added a pair of grabs.

Not to be outdone, the defense had an impressive outing as well, holding the Crimson Storm to 157 total yards with 75 on the ground and 82 through the air.

Nicholas Sierra led the defense with six tackles, two for a loss, including one sack.

Raheem Wilson snagged his third interception of the year, while Rob Gardner added a forced fumble and Jaden Moore recorded his first sack.

On the special teams front, McCrae turned in his first career punt return for a touchdown with a 53 yard return in the third quarter and would finish the night with 84 yards on five punt returns.

SE did not get off to the start it had hoped to as SNU took its opening drive 58 yards on seven plays before Terence Olds scored from three yards out to take a 7-0 lead just 2:56 into the game.

The Storm answered by putting together one of its longest drives of the season going 75 yards on 14 plays and burning 5:49 off the clock, aided by a pair of third down conversions, before Polite would take it in from a yard out.  However, a missed PAT would leave SE trailing 7-6.

The teams would trade fruitless possessions until Southeastern would take over with 2:03 to go in the first quarter and take advantage of a 37 yard run by Akinwande before Polite would run it in from 18 yards out to stake the Storm to a 13-7 lead.

Ronnie Green would turn in his longest run of the night to finish off the first drive of the second quarter for SE, going 58 yards for the score and taking a 20-7 lead.

The Storm would suffer through a pair of turnovers, but the defense would keep SNU off the scoreboard and eventually with 59 seconds to play Southeastern would cap a 99 yard drive with a 26 yard Polite to Okafor connection which would give SE a 27-7 halftime lead.

That lead grew in the third quarter when McCrae took the Myles Roll punt at his own 47 yard line and returned it 53 yards for a touchdown, the team’s first special teams touchdown of the season and the fourth non-offensive score of the year.  It would stake SE to a 34-7 lead with 9:58 to go in the third.

Southeastern would tack on its final score with 2:24 to play in the third quarter when Okafor scored on a nine-yard end around to cap a nine play, 60 yard drive and put the Storm up 41-7 which would hold to be the final score.