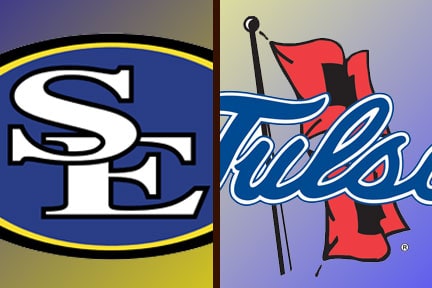 TULSA, Okla. – Southeastern held off a furious Tulsa rally in the final minutes to pull off a 69-66 upset on Wednesday night in Tulsa, Okla.

The win lifts the Savage Storm to 5-6 on the season heading back into Great American Conference play on Dec. 13 when they host Northwestern Oklahoma State at 7:30 p.m. in Bloomer Sullivan Arena.

SE got Herculean efforts from the trio of Danny Powell, Taylor Smaller and Sami Bzai as they combined to score 54 of the teams 69 points.

Powell led the way with 19 points on the night with three three-point buckets, while Smaller was right behind with 18 and three treys of his own. Bzai was just behind him at 17 points with a 4-of-6 effort from three point range.

Conversely, the SE defense held the Golden Hurricane to 34.8 percent shooting night, including a 32.5 percent effort in the second half.

Darius Harris added 10 rebounds in the contest as SE was outrebounded 38-to-36, while Sami Bzai dished out seven assists.

SE turned a three-point halftime lead into a 41-31 advantage less than five minutes intot he second half on a Harris jumper.

The lead would soon after grow to 13 points before TU whittled the Storm advantage to 46-40 with 11:40 to play.

A Harris jumper would end that run and cue a 13-0 run capped by a Smaller three with 7:30 to play which staked Southeastern to a 59-40 lead.

However, the Hurricane would start chipping away with a 15-3 run narrowing the Storm advantage to 62-55 with 1:52 to play.

A pair of Bzai free throws would keep the game at three possessions and a free throw by Antonio Worthy would make the score 65-55 with 1:13 to go.

TU’s Marquel Curtis would drain a three with 1:02 remaining and De’Andre Wright would hit one with 30 seconds on the clock to trim SE’s lead to 65-61.

Bzai would hit one of two free throws and after rebounding a missed Tulsa three he would hit two more to give Southeastern a 68-61 lead with 14 seconds left.

TU would answer with a Shaquille Harrison layup, followed bya James Woodard steal and layup and after he converted the three-point play the Storm advantage had shrunk to 68-66 with 5 ticks remaining.

Danny Powell would go to the line and hit one of two, and a Hurricane halfcourt shot by Harrison would rattle in-and-out at the horn to preserve the SE 69-66 upset victory.

Smaller and Powell each posted 10 first half points, with each player hitting a pair of threes.

The Storm shot 42.9 percent from the field in the opening half, while holding the Hurricane to a 38.5 percent clip overall.

SE made an even bigger difference from long range, hitting 5-of-11 from three while TU hit just 2-of-10 as a team.

The Storm scored first on a Smaller three, but Tulsa answered with an 8-0 run.

The Hurricane responded and by the 8:54 mark of the first half had opened up a 17-12 lead.

Southeastern would keep it within two possessions before making its move with less than a minute to play in the half, first on a Bzai three to take a 26-25 lead and then as Smaller hit a driving layup with two seconds remaining to make the lead 28-25 at halftime.