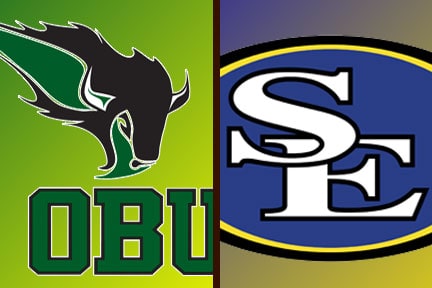 DURANT – Southeastern’s defense forced five turnovers and scored a pair of touchdowns and picked up its first win of the season, downing Oklahoma Baptist 40-27 on Saturday night at Paul Laird Field.

The Savage Storm moves to 1-2 overall and in Great American Conference play and will be back on the road Sept. 26 when it travels to Bethany, Okla., to take on Southern Nazarene at 6 p.m.

The game was the first meeting between the programs since the 1940 season and is Southeastern’s first win since the 1923 campaign.

The offense put together 395 yards on the day, picking up 139 on the ground and adding 256 through the air.

Nelson Akinwande led the ground charge with 82 yards on 18 carries with a touchdown, while Ronnie Green chipped in 61 yards and a score on 18 carries.

Ryan Polite finished the day with 256 yards and a touchdown on 22-of-40 passing, but had his struggles as well with three interceptions and was sacked three times.

Kaymon Farmer was his favorite target on the game with seven catches for 90 yards, while Franky Okafor added three catches for 53 yards and Ty Miller chipped in 53 yards on a pair of receptions.

Nick Sioson caught the only TD pass, a four-yard strike that was his only catch of the game.

Jake Walters connected on a pair of field goals to stay perfect on the season, hitting from 24 and 25 yards out.

The defense held the Bison to 342 yards of total offense, with 110 coming on the ground and 232 through the air.

Jacoby Sanders led the defense in stops with eight tackles on the night, while Harris Everson added five.

Sanders also had a pair of pass breakups, as did Bobby Jackson.

Raheem Wilson turned in his second interception of the season, returning this one 67 yards for one of the team’s two defensive scores.

Orlando Swift would also add an interception, his first of the year and the fourth forced by the team in three games.

DaMarius Lavender and Reggie Marshall each had fumble recoveries, with Lavender falling on his in the endzone on the game’s first play as OBU fumbled the ball deep in its own territory.

Marshall’s was in punt coverage on a punt mishandled by the Bison return man.

Hannah also added his first sack of the year, while the team tallied seven tackles for loss on the night.

Lavender’s fumble recovery on the game’s opening play staked the Storm to a 6-0 lead after a two-point try by Dru Smithwas off the mark.

Sioson would haul in his four-yard TD pass at the 7:42 mark of the first half and after the PAT kick was good the team took a 13-0 lead.

Akinwande would add his lone rushing touchdown with 1:39 to go in the quarter to stretch the advantage to 20-0.

Walters would hit his first field goal, this one 25 yards, at the 7:32 mark of the second quarter for a 23-0 lead, but OBU would finally find an answer with a Jacques Henderson 21 yard rushing TD, but Lavender would block the ensuing PAT to keep the score 23-6 which would be the halftime difference.

The Bisons would add a score on Brynden Pitzer’s 73 yard interception return for a touchdown, and after adding a two-point conversion on a pass the score was 23-14.

The Storm found an answer with 5:14 to play in the third when Green found his way into the endzone from a yard out to push the Storm lead to 30-14.

OBU would respond with a 45 yard scoring strike from Dez Stegall to Josh Pettijohn, but a failed two-point try would leave SE up 30-20.

OBU would find the endzone one more time at the 14:50 mark of the fourth quarter when Cooper Koons hit Derek Serowski for a 50 yard touchdown on a trick play, closing the score to 37-27.

Walters would tack on the game’s final points with a 24 yard field goal at the 8:59 mark of the final quarter to fashion the 40-27 final score.