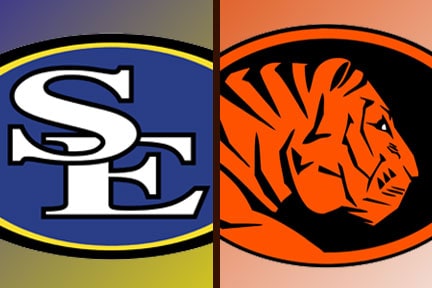 ADA, Okla. – Southeastern got a record-setting performance in efficiency from C.B. Cantwell and Ronnie Green turned in his sixth 100-yard rushing performance of the season as the Savage Storm took the 100th meeting of the rivalry 34-27 on Saturday afternoon in Ada, Okla., in the Great American Classic.

The win gives SE a 7-4 record to end the season after winning its last two. It also means that the rivalry will meet the century mark with Southeastern holding a 48-46-6 lead in the all-time series. It is the third-straight win in the series for the Storm, its longest winning streak since taking six in-a-row from 2004 to 2009.

Offensively SE put together another balanced attack and tallied 444 yards with 234 on the ground and 210 through the air.

C.B. Cantwell turned in the school’s most accurate passing performance, despite having an interception he would complete 21-of-23 through the air for a 91.3 completion percentage, topping an 81.0 percent effort (17-of-21) by Drew Beard during the 2004 season. He finished with 210 yards and a touchdown.

Kaymon Farmer hauled in a team-best seven catches and had 55 yards and the lone receiving score, while Anterric Maxey-Meshilaya led the way in yardage with 58 on three catches, with Bryce Steele right behind with three catches and 56 yards.

Green finished with his sixth 100-yard rushing outing, turning in 121 yards on 30 carries with a pair of touchdowns. Devlon Wortham would finish just shy of the century mark with 97 yards on 10 carries with a touchdown. Cantwell would add 17 yards on the ground.

Joel Carlos would finish 2-for-2 on field goals and was 4-of-4 on PATs while adding one 51 yard punt.

Defensively Sione Taufahema led the way in tackles with six, including one for a loss, while Luke Craddock was right behind with five.

Jarrett Ingram would snag in interception in the end zone and later recovered a fumble, while Bobby Jackson forced it.

Wortham put the Storm on the board with an 18 yards to cap a mammoth 15 play drive that covered 95 yards and burned 6:57 off the clock for the first score of the game and a 7-0 lead.

The Tigers evened the score at 7-7 early in the second on a 29 yard pass from Brooks Holder to Jason Gaines on the first play of the quarter.

SE answered by going 54 yards on seven plays on the ensuing drive before Carlos connected on a 37 yard field goal for the 10-7 lead.

ECU would get the last word in the first half however as Jarod Haynes would connect oj a 45 yard field goal as time expired to cut SE’s lead to 17-10 at halftime.

Carlos would put the Storm on the board first in the second half with a 38 yard field goal at the 9:00 mark to make the score 20-10.

The Tigers responded with a David Moore touchdown, but a failed PAT would leave SE up 20-16 with 6:54 to go in the half.

Cantwell would answer on SE’s next drive, again covering 80 yards and capping it with a 10 yard connection with Farmer to open up a 27-16 lead which would hold through the end of the third quarter.

A Holder TD run less than two minutes into the fourth quarter along with a two-point conversion would close the Southeastern lead down to just 27-24.

The ensuing Storm drive would end in a turnover at midfield, but three plays later Jackson would force a Moore fumble following a catch and Ingram would recover to end the threat.

SE would take advantage as Green would cap a 67 yard drive with a 15 yard touchdown run to push the lead to 34-24.

The Tigers would respond by cutting the gap back to a one score contest with another Haynes field goal, this one from 37 yards out to trim the SE lead down to 34-27 with2:59 to play.

The Storm recovered the following onside kick and burned 2:03 off the clock before a Cantwell pooch punt would pin ECU at their own 15 yard line with 53 seconds to play and after picking up a first down the Storm defense hardened and when Marcus Harris batted away a fourth-down pass with 13 seconds to play it sealed the 34-27 win for SE.