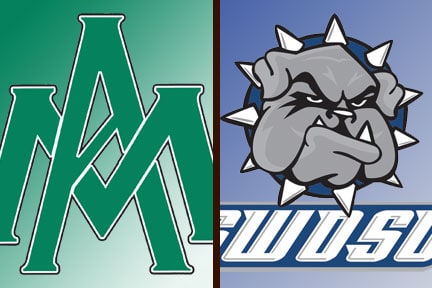 The Bulldogs rolled up 487 yards of total offense with a balanced attack as quarterback Marc Evans finished 23-for-32 for 331 yards and three touchdowns while seven different players carried the ball as the Bulldogs grinded out 156 yards rushing on 49 carries.

SWOSU wasted little time getting on the scoreboard as D.J Jones took a swing pass on the third play of the game and turned on the burners as he found paydirt from 71 yards out. After a Boll Weevil score, Jones was again the beneficiary of a touchdown pass from Evans, this time from 33 yards to give him 116 receiving yards in the opening frame. Kenneth Martey tacked on his first score as a Bulldog, a 13-yard scamper through the UAM defense allowing SWOSU to take a 20-7 lead after the first quarter.

UAM used a 14-play drive to open the second quarter but they were held to a field goal, making it 20-17 with 6:34 to play in the half but Bulldogs scored the final 10 points of the half, including a 28-yard TD pass from Evans to Derrick Styles on fourth and three, to take a 30-17 lead to the break.

Arkansas-Monticello received the second half kickoff and used another 14-play drive to get into scoring territory, but the SWOSU defense again stiffened and held the Weevils to a field goal that made it 30-20 with 9:25 to play in the third quarter. That would be as close as UAM would get, however, as SWOSU took the air out of the ball for the rest of the game, using their running game to score three touchdowns on drives of seven plays or more.

Martey scored his second touchdown of the game late in the third quarter on a one-yard run before Karltrell Henderson capped off the game with a pair of rushing touchdowns, his first two collegiate scores, in the fourth quarter.

SWOSU’s defense allowed 360 yards to the Boll Weevils, who scored twice on long pass plays along with the extended drives that resulted in field goals. The Bulldogs forced three turnovers as Conner Bays, Cameron Nix and Dominic Blue intercepted UAM passes. Bays tied with Austin Loomis for team-high honors with eight tackles while Gentry Rogers and Kapena Olsen each had six stops. Collier Ward made the Bulldogs lone sack for a 12-yard loss and also had a pass breakup.

Martey led SWOSU with 83 yards on 16 carries while Henderson had 52 yards on 18 carries as both runners scored two touchdowns. JR Omigie had a team-best six receptions for 36 yards while Jones had 116 yards receiving on just three catches with two touchdowns. Styles had another touchdown and 90 yards on five receptions while six others caught a pass from Evans.

The victory evens the Bulldogs record at 1-1 (1-1 GAC) heading into a showdown with Ouachita Baptist next Saturday night at ASAP Energy Field.

– D.J Jones 71-yard TD reception was the first reception of more than 50 yards by SWOSU since November 9, 2013 (Dustin Stenta to MJ Porter at Tarleton State)

– Marc Evans completed 71.8% of his throws, the fourth-best completion percentage at SWOSU in the NCAA Division II era