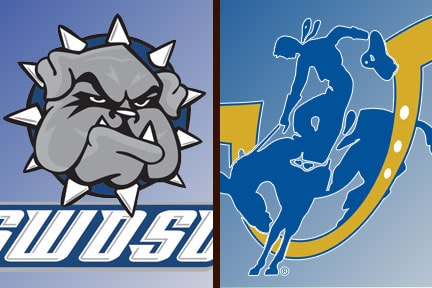 MAGNOLIA, Ark. – The SWOSU Football team stood toe-to-toe with Southern Arkansas on Saturday night, taking a 24-22 lead in the fourth quarter before the Muleriders scored a late touchdown to defeat the Bulldogs 28-24.

Marc Evans was 14-for-32 passing for 179 yards and three touchdowns in his first game as a Bulldog, directing the SWOSU offense to 331 yards of total offense on 67 plays. His top targets were Carlos Smith and Derrick Styles, who each had three receptions with Styles hauling in a pair of touchdown passes while Collin Bricker made the most of his only catch, a 14-yard touchdown.

After falling behind 6-0 early in the second quarter, Collier Ward forced a fumble that Tyler George recovered, setting up a 44-yard touchdown pass from Evans to Styles that put SWOSU on top 7-6 following Tyler Peterson’s extra point. SAU tacked on another touchdown following a 14-play drive and took a 13-7 lead to the break.

After the break, SWOSU marched 65 yards in five plays – including a 40-yard run by D.J Jones – that was capped off when Evans found Bricker to put the Dawgs up 14-13. The Muleriders scored on their next two possessions, but had a missed extra point that kept their lead at 22-14 heading into the fourth quarter.

SWOSU dominated early in the quarter with Colton Wright forcing a fumble that Gentry Rogers pounced on top of, setting up another scoring drive. The Bulldogs went 45 yards in 11 plays, including two key fourth-down conversions, before Evans found Styles in the back corner of the end zone with a fade for a nine-yard touchdown. Evans then connected with a spinning Teverick Boyd for the two-point conversion, tying the game at 22-22.

The Bulldog defense and special teams would give SWOSU the lead once again as the defense forced a three-and-out before Tanner Thompson broke through and blocked the Muleriders punt out of the back of the end zone for a safety, giving SWOSU a 24-22 advantage with 8:55 to play. The offense was unable to capitalize on their next drive, however, giving the ball back to SAU with plenty of time to play.

Southern Arkansas went for the long ball on the first play of their next drive and Barrett Renner found Jonathan Weisheit for a 75-yard touchdown, with Weisheit dodging several SWOSU defenders for the go-ahead score. The Bulldogs defense did hold on the two-point conversion, leaving them facing a 28-24 deficit with 6:24 to play.

SWOSU had two more chances offensively, but were unable to get anything going as penalties and sacks ended both drives. The Bulldogs final possession was ended when Evans was sacked and lost the ball, which was recovered by SAU, who was then able to run out the clock.

“Our kids played their butts off, that’s the bottom line,” SWOSU Head Coach Dan Cocannouer said in his postgame interview. “There are some things we need to fix, but we’ll get that taken care of this week and we’ll be ready to go out and win our next game.”

Defensively, SWOSU surrendered 523 yards of total offense but forced two turnovers that directly led to points along with the blocked punt that went for a safety. Conner Bays and Tanner Thompson had 13 tackles apiece while Thompson also led the way with 2.0 tackles for loss and a quarterback hurry. Tyler George and Kapena Olsen each had 10 tackles apiece with Olsen also adding two pass breakups.

SWOSU starts the season 0-1 for the second straight season, but they look to win their home opener for the fourth straight season next Saturday (Sept. 12) when they welcome Arkansas-Monticello to ASAP Energy Field in Weatherford.