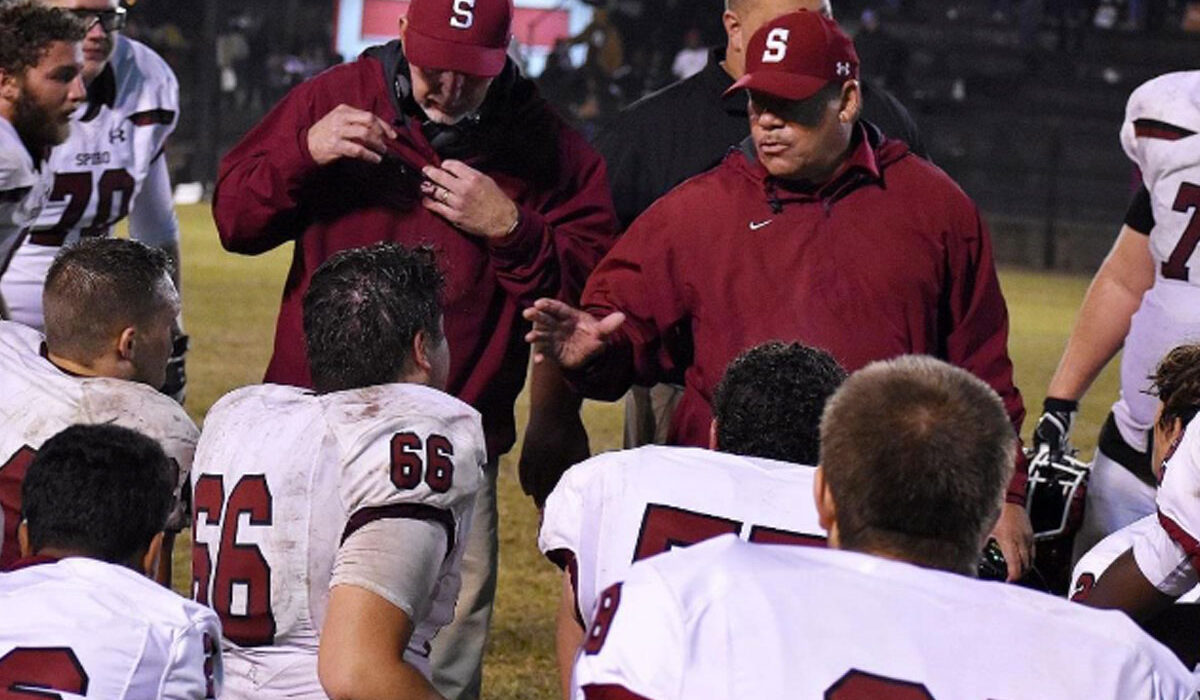 Spiro Public Schools, with a heavy heart, is announcing the retirement of Hall of Fame Head Football Coach Chris Bunch.

As a student and employee, Coach Bunch has dedicated more than 50 years to Spiro Public Schools. Coach Bunch graduated from Spiro High School in 1972 and began as an assistant football coach during the 1976 football season. He received his bachelor’s and master’s degrees from Northeastern Oklahoma State University in Tahlequah, where he also lettered in football for four seasons. Coach Bunch was inducted into the Oklahoma Coaches Association Hall of Fame in 2018. He finishes his storied career ranked 23rdall-time in Oklahoma in high school football wins for a head coach with 228.

Coach Bunch led the Spiro High School football program from 1990 to 2020, 31 seasons as head coach. Prior to being named head coach, Coach Bunch was an assistant football coach for 14 seasons at Spiro. He was named the East All State Head Football Coach in 2005. Coach Bunch has been a part of three OSSAA state championship track teams (Boys: 1979, 1999; Girls: 2017) and four runner-up finishes. As an assistant boys basketball coach he has been a part of numerous LeFlore County Championship teams and OSSAA State Tournament teams.

Coach Bunch has received a remarkable number of coaching awards from his peers and the media over the course of his illustrious career. While being a Hall of Fame coach, Coach Bunch has also been an outstanding teacher and mentor to thousands of Spiro students. Coach Bunch is the winningest African American high school head football coach in Oklahoma history since the end of segregation. Coach Bunch is married to his wife Brenda and is the proud father to son, Bryan, and daughter, Traci.

Words cannot express the gratitude and appreciation we feel for Coach Bunch’s service to our school and community. He will be greatly missed.

“Coach Bunch has committed his life to making a difference in the lives of Spiro students and athletes for almost half a century. In today’s society of self-serving, short term success, Coach Bunch’s example of sacrificial commitment is not only rare but historic and inspiring. Spiro Public Schools is forever indebted to his leadership and investment in our school. Coach Bunch may retire from our school, but never from our hearts.”
~Spiro Public Schools Superintendent Richard Haynes

“Coach Bunch is one of the most unique coaches I have been around. His passion for football, his players, and assistant coaches is truly a gift that not all coaches possess. I have been an assistant coach with Coach Bunch for the past 26 years. I can truly say I could not ask for a better friend, colleague, and mentor. He is one of the most dedicated and hardworking coaches I know. Not only does he know the game of football, he leads by example of what a true dedicated coach should be. Some of the best times of my life have been with Coach Bunch.

“Above all, Coach Bunch made Spiro football fun for all involved. He is one of the most well-known and respected coaches in Oklahoma. I feel very honored to have been a part of his life as an assistant coachand friend.”
~Spiro High School Principal Larry Greenwood

“It was a pleasure to coach Chris Bunch as a scrappy young defensive back and running back. It has been an honor to watch Coach Bunch become the legend he is today. His tireless dedication to molding his players into men of character has positively impacted hundreds of lives and made the Spiro community, his family, and his old high school coach proud.”
~Former Spiro High School Head Football Coach L.D. Johnson – HOF 1984

“Chris Bunch is and willalways be a true Spiro Bulldog. The leadership, loyalty, and commitment he has shown to the athletes and students of Spiro has set the standard for generations to come.”
~Bill Blankenship-All State QB 1974 – HOF 2009
Head Football Coach Owasso High School-Former Spiro High School Head Football Coach

“When I think of Coach Bunch I think of someone more than a coach. He was a mentor, a hero, and all around great person. I had the honor my sophomore year of being on his first team as head coach. Not only did he teach us how to play the game of football, he taught us how to conduct ourselves as student athletes and as men. I later went on to have a successful career at the University of Arkansas and Coach Bunch played a major role in my success. He prepared me for experiences on and off the field and I am so appreciative of that. Cheers to one of the greatest coaches in Oklahoma history. Enjoy your retirement Coach Bunch. ”
~Anthony Eubanks – 1992 All State WR
University of Arkansas

“As an African American student-athlete, African American teacher/coaches were rare in our area. Coach Bunch was most definitely a positive role model for me not only in the classroom but also on the field as well. Thank you Coach Bunch.”
~Mack Chambers – 1990 All State QB
Head Baseball Coach -Seminole State College

“When I think of Coach Bunch, I think of his commitment to the students and community of Spiro. I think of his loyalty, dedication, and love for the game of football. I think of how he was a great role model, especially a person of color who convinced me I couldbe successful too. Coach Bunch had a great impact on me. He helped me become the man I am today. Thank you Coach Bunch!”
~C.J.Steele – 1996 All State WR
Missouri State University

“Coach Bunch’s character and leadership are unmatched. He’s guided a number of successful football players and teams over the course of his Hall of Fame career, but the growth I experienced as a young man under his guidance has stuck with me the most in my life after sports. Coach Bunch helped instill a great amount of mental fortitude and humility that I am forever grateful for.”
~K.J. Booze – 2011 All State DB
Dartmouth College

“The level of success Coach Bunch has accomplished on the field is impressive, but the positive impact he has made on myself and so many otheryoung men is nothing short of incredible. Coach Bunch didn’t use young men to win games, he used the game of football to win the hearts and minds of young men. He exemplifies ‘Hall of Fame’ and I’m proud to call him Coach.”
~Lee Blankenship – 2003 Spiro QB
Mustang High School Head Football Coach

Miles driven (roundtrip) to Spiro each day from his home inMuskogee as an employee in 44 years :1,306,800 miles (52 trips around the world)