St. Gregory’s advances to title game with blanking of Park 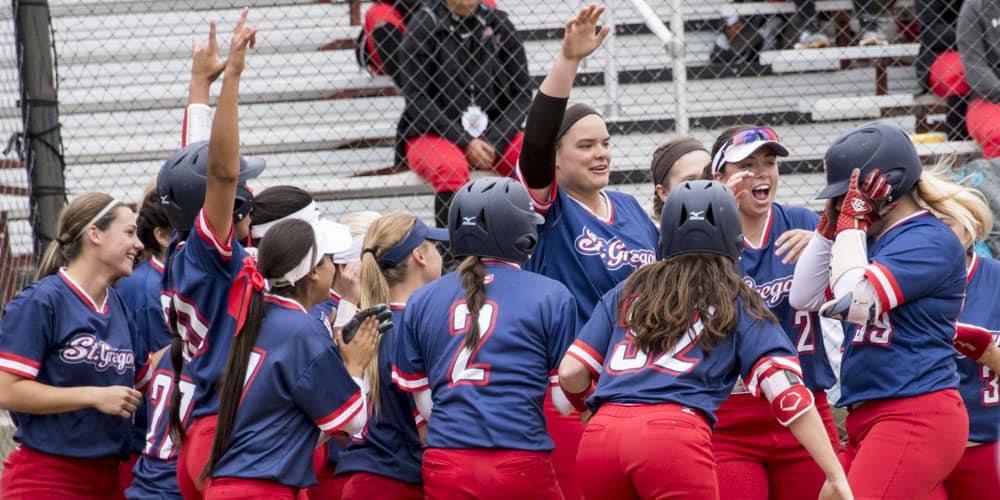 SHAWNEE – Top-seeded St. Gregory’s advanced to the championship game of the NAIA Softball Opening Round Tournament with a 4-0 victory over Park (Mo.) Tuesday at Firelake. The Cavaliers won their 12th straight game overall and have outscored their opponents, 13-0, in two games of St. Gregory’s Bracket play.

SGU (45-5) got a stellar performance in the circle from Bryn Houlton. The sophomore righty from Savannah hurled a three-hitter, striking out four in a complete-game effort. Houlton improved to 17-2 on the season.

She got all the support she needed with one swing of the bat in the first inning. Ashli Hafford, who ranks among the NAIA’s elite in several offensive categories, blasted a two-out, two-run home run to right field to make it 2-0 Cavs.

St. Gregory’s added a run in the third on a Sammy Leisinger RBI single, and then completed the game’s scoring in the fifth when Hafford was hit by a pitch with the bases loaded.

Hafford, who leads the NAIA in batting average and slugging percentage, finished 1-for-2 with three RBIs and a run scored. Sutv Meely, who went 3-for-3 in Monday’s opener, followed that up with another three-hit game. She scored once. Leisinger was 2-for-4 with an RBI.

Park’s Scotlin Hurley (8-8) suffered the loss after giving up four runs on eight hits over six innings. She struck out two. Hurley, Brooke Kunkel, and Sara Rothe provided the Pirates’ only hits.

SGU advances to the championship game for the third straight year. That game is scheduled for a 1 p.m. start Wednesday at Firelake.