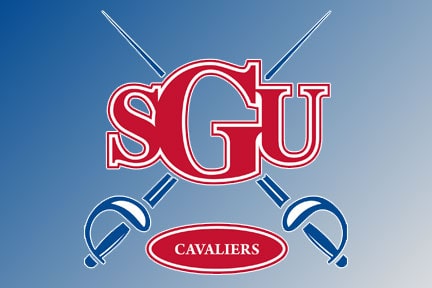 COLUMBIA, Mo. – Despite a season-high 18 points from junior Porsche Young, the St. Gregory’s University women’s basketball team dropped an 83-68 decision Sunday to Columbia College on the second day of the Cougars vs. Cancer Classic. The Cavaliers finished the weekend winless after losing Saturday to No. 18 William Woods.

SGU (7-7) held serve with the host team from the field – both teams shot 42 percent – but couldn’t overcome a 48-28 deficit on the boards. The Lady Cougars, which outrebounded the Cavs 29-11 in the second half, had a 22-9 advantage in second-chance points.

Young finished 6 of 14 from the field, including 3 of 5 from three-point range. SGU junior Kalie Lucas, who entered the game with an NAIA-leading 36 blocks, padded that total with a game-high six swats. She and freshman Ayrionna Taylor each had 12 points.

Columbia extended an early one-point advantage to 12 over the span of four minutes after completing a 14-3 run with just more than eight minutes remaining in the first half. The Lady Cougars held SGU to only one field goal in seven trips during that span, and then cruised to a 14-point halftime lead.

Columbia’s advantage ballooned to 19 on three different occasions in the second half before the Cavs seized some momentum. After Taylor made two free throws with 5:23 remaining, the Cavs cut it to 68-59. But SGU would miss four of its next five shots and got no closer.

The Cavs open Sooner Athletic Conference play Thursday at home against Wayland Baptist University on Citizen Potawatomi Nation Night. All CPN employees will be admitted for free for both the women’s 6 p.m. game and the men’s 8 p.m. game.