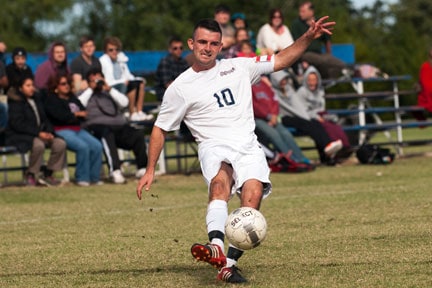 SHAWNEE – St. Gregory’s forward Stephen Cummins has been named the NAIA Men’s Soccer National Offensive Player of the Week and Cavalier goalkeeper Brock Vorwald has been selected as the NAIA Men’s Soccer National Defensive Player of the Week, the national office announced Tuesday. Cummins and Vorwald were chosen for their performances during the week of Nov. 4 – 10 and were selected out of a pool of conference, independent, and unaffiliated grouping award winners.

Cummins, a senior forward from Portmarnock, Ireland, propelled the Cavaliers to two crucial victories this week.  The senior scored two goals and added an assist in St. Gregory’s 4-2 win over John Brown (Ark.)—a victory that punched the Cavaliers’ ticket into the Sooner Athletic Conference (SAC) Tournament. Then—in the first round of SAC Tournament play—Cummins scored the lone goal, on a free kick in the 84th minute, as the 8-7-1 Cavaliers upset then-No. 12 Wayland Baptist (Texas), which held a 13-2-2 record heading into the contest. On the season, Cummins leads the Cavaliers in nearly every offensive category including: goals (17), assists (6), points (40), shots on goal (40) and shots (70). Nationally, he ranks among the NAIA leaders in total game winning goals (5th, 6), game winning goals per game (8th, .33), total goals (13th, 17), goals per game (16th, .94), total points (18th, 40), points per game (19th, 2.22), shots on goal per game (31st, 2.22) and shots per game (3.89).

Vorwald, a senior goaltender from Norman, Okla., anchored the Cavalier defense in wins over John Brown and Wayland Baptist, allowing just two goals on the week. The senior recorded two saves as St. Gregory’s defeated John Brown, 4-2, in the final game of the regular-season, securing a place in the SAC Tournament. Against Wayland Baptist in the first round of SAC Tournament play, Vorwald made six saves, blanking the Pioneers offense that averaged 2.44 goals per game and had been shut out just once during the regular-season. In doing so, he earned his sixth shutout of the season, a career high. On the year, Vorwald has allowed just 1.04 goals per game, good for 37th in the NAIA. For his career, he has accumulated 261 saves, 21 wins and 12 shutouts while playing 4758 minutes in goal for the Cavaliers.

With their selections this week, Cummins and Vorwald become the first teammates to sweep the Men’s Soccer Player of the Week honors since Paul Islas and Steven Waite of former-member Fresno Pacific (Calif.) on Oct. 11, 2011. Riding the nationally-recognized performances of Cummins and Vorwald, St. Gregory’s stands on the precipice of an unlikely Men’s Soccer National Championship Opening Round berth.