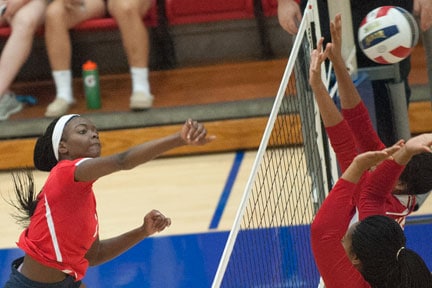 GOODWELL, Okla. – St. Gregory’s completed a perfect weekend with a five-set win (14-25, 25-17, 26-24, 18-25, 15-12) Saturday over University of the Southwest in the championship match of the Aggies Challenge Tournament at Oscar Williams Field House. The Cavaliers finished the event 4-0, their longest winning streak since early in the 2012 season.

St. Gregory’s (4-6) dropped the title match’s first set but answered quickly. The Cavs took the second set 25-17 before rallying from as many as six down to take a tight third, 26-24. The Mustangs forced a decisive fifth frame and led by three early on.

St. Gregory’s battled back, though, tying it at nine on a Morgan Brown kill from Cierra Mullins. The Cavs wouldn’t trail again. Up 12-11, they scored three of the match’s final four points.

The Cavs hit .181 as a team compared to .164 by USW. Leading the attack was Tiphani Funk’s 15 kills. Mullins narrowly missed a triple-double with nine kills, 16 assists and 14 digs. Maggie Lasater totaled 30 assists and 10 digs.

The Cavaliers travel to Weatherford Thursday to take on Southwestern Oklahoma State. First serve is scheduled for 6 p.m.