Cavaliers still taking one at a time 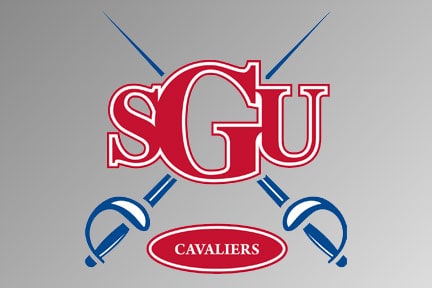 For a team with a 5-20 record, the St. Gregory’s Cavaliers know how near they have been to turning that record on its ear this season.  And the quality of the victories they have earned lends evidence to that line of thinking.

The Cavs have wins over LSU-Shreveport (then ranked sixth) and Southern Nazarene (then No. 12).  On Monday, SGU took to the road and took out No. 5 Rogers State in Claremore.

Head coach John Martin is aware how close his team is each week.  But as members of the Sooner Athletic Conference, the bulk of the Cavaliers’ schedule is league play that is challenging.

“You’d think with wins like that, it would equate to a 20-win season, but our conference is just very difficult,” Martin said.

“It’s probably the toughest small college conference in the nation.”

“We’ve come up close so many times,” Martin said.  “Last week, we had a one-point loss and a two-point loss.  So I think that our kids really deserved that big win against Rogers.

“But our guys have responded well and kept their heads up throughout.  There have been some injuries and other difficulties.  But they’ve been good to me and they’ve had good attitudes.”

St. Gregory’s has three games remaining in 2011-12, as the team has been mathematically eliminated from reaching the playoffs or conference tournament.  Martin and his team, though, have not mailed this season in.

The Cavaliers have three games remaining, with two of them at home.  And Martin and his team have a looking ahead somewhat, they are concentrating on each of the games to come.

“I know this sound like a cliché, but we really are taking one game at a time and getting ready to hopefully transfer that to next year,” Martin said.

“The guys are still playing hard.  For many teams that are out there that aren’t going to the playoffs, their coaches are completely looking for next year.

“We have a lot of players returning.  And though we look ahead, too, we are trying to win every game we have left at this point.”

The Cavaliers have only one senior, Brandon Jackson, on their roster.  Coach Martin has ten other players that have averaged at least ten minutes of court time this season.

St. Gregory’s tips off the final three games with a home contest against Wayland Baptist.  The game follows the women’s and will start around 3 p.m.