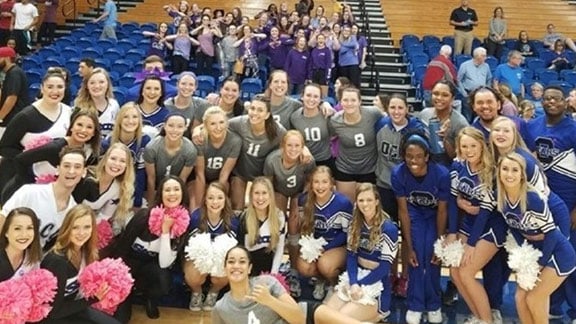 The Stars, ranked 12th in the NAIA, captured its first SAC volleyball regular-season crown. Oklahoma City improved to 26-3, 17-0 in the SAC.

OCU will attempt to become the first team since Oklahoma Baptist in 2013 to roll through the SAC regular season unbeaten 7 p.m. Nov. 1 against St. Gregory’s in Shawnee, Okla. As the league regular-season champion, the Stars picked up one of the SAC’s bids into the NAIA Championships.

Caitlin Chamness established a new OCU single-match record with 10 aces, surpassing the nine Danielle Robison racked up vs. Texas College on Sept. 18, 2013 in Sherman, Texas. The Stars set the single-match program record by serving up 19 aces as a team. OCU’s previous mark had been 16 at Bacone on Sept. 18, 2007.

“We had a great night from the service line with 19 aces, 10 coming from Cait,” OCU coach Kyle Steele said. “It makes the defense’s life a lot easier when we are serving tough. Our crowd was great again for homecoming week and would really like to thank the Alpha Chi’s for partnering with us for our domestic violence awareness night. It was awesome seeing all the purple.”

Chamness, a junior from Littleton, Colo., had five kills and topped her previous career best of six aces that she had three times earlier this season. Sanja Vojnovic, a junior from Bajeljena, Bosnia, accumulated 32 assists, four kills and three aces, while Shekinah Clarke, a sophomore from Waianae, Hawaii, posted eight kills and five digs for the Stars.

In the third set, OCU reeled off five points in a row to go up 13-4 as Kenzie McMullen notched a pair of aces. The Stars closed out the match by scoring the last five points. Mandy Martincich and Chamness nailed kills, and Vojnovic unleashed two aces in a row.