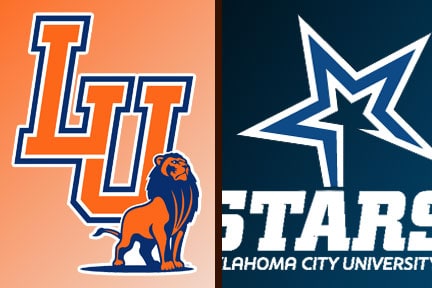 The Stars, now 2-0 on the season, got an old-fashioned 3-point play from Jamaal Crayton with 15 seconds left in the game to take the three-point lead and got a stop on the defensive end to earn the 73-70 victory.

“At the end of the day I thought our guys’ resolve is what carried towards the end of this game,” OCU coach Dionne Phelps said. “Langston shot really well, but overall I’m happy with the resolve.”

Kaleb Smith led the Stars’ offense early scoring five of OCU’s first seven points. Terry Johnson added key buckets at the 14:27 and 11:46 marks of the first half to keep the Stars on top of the Lions.

The teams traded baskets for much of the first half.

OCU closed the period on an 8-2 run and took 36-28 advantage to the locker room at halftime. Ivan Matip capped the scoring with an offensive rebounds and layup in the closing seconds and fueled the run with four points.

OCU scored 14 points in the paint and seven points off turnovers in the first frame. The Stars outscored Langston 7-2 in second-chance points.

The Stars got an offensive rebound and layup from Terrence Walker to start the second half and built their lead to double digits. A 3-point jumper from Smith and a pair of free throws from Johnson gave OCU a 43-31 lead with 16:43 remaining.

Terence Bonhomme converted a pair of free throws at the 13:43 mark and Dorion Gigger scored in the paint on the next possession to spark a 9-2 run for the Stars. Jamil Donovan drove the lane and scored to cap the run and give OCU a 58-43 lead with 11:23 to go.

Langston’s Landon Gray and David Harris led a 19-5 charge for the Lions and cut the OCU lead to 63-60 with 5:11 left to play. Harris scored eight points and Gray added five during the run.

Back-to-back 3-pointers from Renard Green and Bobby Ward brought the Lions to within one point at the 3:06 mark, but free throws from Chris Campbell and Johnson stretched the Stars’ advantage back to 70-66.

Green hit a pair of free throws and Gray hit a jumper to bring Langston all the back and tie the score at 70-70 with less than a minute to play.

With 15 seconds left on the clock, Crayton drove around a Dema Sane screen, scored and drew a foul on Gray. Crayton converted the 3-point play and gave the Stars the 73-70 victory.

The Stars will return to action against Central Oklahoma at 7 p.m. Nov. 14 at Abe Lemons Arena.