Stars get by Drovers 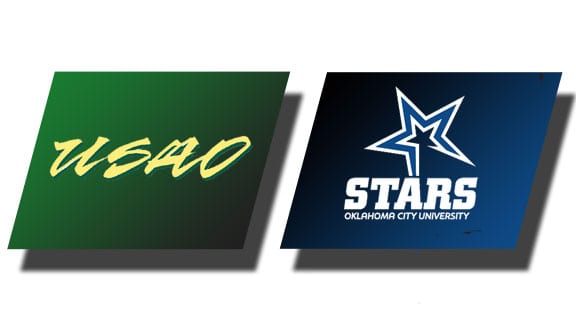 OKLAHOMA CITY – Ryan Wiley’s putback as time ran out gave Oklahoma City University a 95-93 victory over USAO on Thursday night at Abe Lemons Arena.
Lou Dunbar became the first OCU player to score 50 points since OCU entered NAIA membership in 1985-86. The Stars, ranked eighth in NAIA Division I men’s basketball, went to 14-5, 5-4 in the Sooner Athletic Conference.
Dunbar tallied 50 points by shooting 14-for-18 from the field, 11-of-14 from beyond the arc and 11-for-12 on free throws. Dunbar, a junior from Seabrook, Texas, fired in 11 3-pointers to tie Eric Tatum’s and Tony Terrell’s single-game OCU record.
Terrell poured in 11 treys against Incarnate Word (Texas) on Nov. 16, 1989, while Tatum equaled Terrell with 11 vs. St. Gregory’s on March 4, 2004. Tatum had the most points during OCU’s NAIA era with 46 that same game in 2004. Gary Gray piled up 55 points for the OCU record vs. West Texas State on Jan. 20, 1967 during the program’s NCAA Division I days.
“I’ve never seen a kid go for 50,” OCU coach Vinay Patel said. “For a year and a half now, I’ve told that kid, ‘If you take good shots, the offense will allow you to score a lot of points.’ You did not see very many forced shots tonight. Once he got hot, we unloaded the playbook for him. I called about every set we have to get him a look. He just continued to hit shot after shot after shot.”
On the final play, Jonathan Reed fed the ball to Xavier Smith, who put up a jumper just outside the lane as time was winding down. Smith’s shot bounced off the rim, then Wiley tipped in the winning bucket before the buzzer.
Wiley drove in for a layup to give the Stars a 93-91 edge with 42 seconds left. Wiley answered Taran Buie’s trey that leveled the score 91-91 with 1:06 remaining. Buie, the NAIA’s top scorer this season, registered 27 points for USAO.
“I’ve been hard on him all year,” Patel said of Wiley. “What you guys see at the end is what I thought he should be doing this whole year. The things he did that you guys saw were the athletic play he made when he finished with the and-1 and the tip at the end. Probably the biggest play was the block he had with the late shot clock. He is athletic. He is active. I’m glad he finally tuned in and came up for us clutch for us.”
Dunbar filled in at point guard late in the game. Dunbar canned his 11th 3 at the 1:25 mark to put the Stars in front 91-88. USAO’s Imani Edwards downed a trey to tie the game 88-88 with 1:40 left.
“He got hot,” Patel said of Dunbar, whose father, “Sweet Lou” Dunbar, played basketball at the University of Houston and for the Harlem Globetrotters. “We’ve seen that in practice all the time. You’ve seen that in other games. He continued to stay with the plan of taking good shots. He’s capable of scoring big for us nightly.”
Dunbar dropped in a 3-pointer to give OCU its largest advantage of the game 69-62 with 12:28 to go. USAO stormed back to knot the score 69-69 on Brendan Chapman’s free throws.
Walter Rickett, a junior from Dallas, provided Oklahoma City with 15 points, and Tyler Alderman, a junior from Fishers, Ind., added 10 points, five rebounds and two steals. Reed, a junior from Powder Springs, Ga., handed out a career-best 11 assists.
OCU nailed 14 treys. The Stars shot 65.4 percent from the field in the second half and 56.4 percent from the floor for the game.
The Stars face Bacone at 5 p.m. Saturday at Abe Lemons Arena.