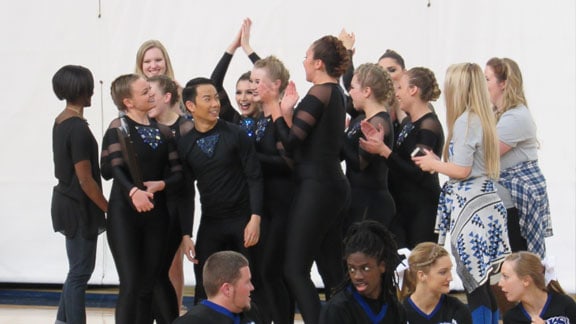 For the NAIA defending national champion OCU cheer team, it was the fifth consecutive year to take the title in the qualifying round. The Stars finished with 92.85, more than three points better than second place Bethel (Kan.), which earned 89.68 points.

“We had a couple of mistakes, but it was a really good stepping stone for us for nationals and in the future.”

The team earned an automatic bid as the winner of the South regional competition. The other regional qualifiers – North, East and Midwest – each will send an automatic bid, and eight other at-large bids will be determined from the four regions.

“We did well today. We went into the final competition in third and in the final dropped a couple of stunts and ended up in fifth.

“But we’re pretty happy with that.”

The Cavs will wait to see if they will receive an at-large bid to NAIA nationals.

It marked the second year in a row for the OCU pom squad to earn a first place finish at the regional level, and an automatic bid to the national level.

The Stars scored 111.12 points overall and distanced themselves by more than five points from second place Baker (Kan.) who scored 105.61.

Tasha Hinex, assistant coach for the Stars’ competitive cheerleading and pom teams, who directs the pom squad, spoke about her team’s preparation for the event, specifically as the competition drew near.

“I feel great,” Hinex said. “I think this week’s hard work definitely paid off. They did a great job.”

Hinex also said she feels the team is where it needs to be at this point in the season.

“I think they’re on the right track. I think they’ve worked hard and learned to not settle, but to continue getting better and find more things to improve on while they’re improving on everything else.”