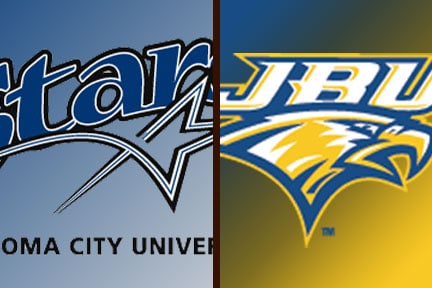 The loss continues JBU’s difficulties against Oklahoma City. The Golden Eagles haven’t been able to defeat the Stars since 2001 when John Brown upended then-No. 1 OCU at Murray Sells Gymnasium.

At the 14:48 mark of the second half, Fernandez suffered an injury that sent her out of the game as Oklahoma City then would piece together its game-winning run. She finished with a team-high 16 points while grabbing five defensive rebounds. Brooke Barker landed in double digits by finishing 5-of-6 from the free throw line while knocking down 3-of-8 chances from the field. Sierra Shipley chipped in with eight points and seven rebounds and Lauren Rogers came off the bench to contribute eight points and six rebounds, including two triples on five attempts.

Fernandez opened the game with six points, including a long-range bucket, to power John Brown to an early 12-7 lead. Pressing back to a 14-12 margin, Kami Garrison stemmed the Stars’ rally with a triple at the 11:26 mark. OCU eventually took its first lead of the afternoon and extended it to a 21-19 tally, but Barker and Morgan Ankrom each split a pair of trips to the line, knotting the score at 21 apiece.

Three ties later, an OCU triple and a made free throw bumped the lead to four, but John Brown grabbed a late bucket when Barker finished a fast-break attempt from Fernandez, sending the Golden Eagles into the intermission down just a pair, 31-29.

John Brown returned to the floor and Fernandez quickly landed her third trey of the game, briefly returning the lead to the hosts. Barker’s layup at the 17:35 mark setup a great rejection on the defensive end, allowing Shipley to sink a pair at the line, forcing a 39-38 John Brown lead. After conceding a retaliatory Oklahoma City bucket, Fernandez again maintained JBU’s lead when her cut to the bucket was met with a great Garrison feed down low.

Moments later Fernandez came down on a Star foot, forcing her out of the contest. The visitors took advantage, holding the Golden Eagles scoreless over the next 10:13 while darting to a 19-0 run that was eventually halted by a Rogers’ three-pointer with 5:12 left in the contest. Rogers would score five of the hosts’ final nine points, as Abbie Warren made her return from injury with a late bucket and Shipley netted a pair of free throws in the waning moments.

The Stars (15-2, 12-1 SAC) forced the Golden Eagles into a season-high 21 turnovers while only committing five of its own. While John Brown shot the ball at a 39.5 percent clip from the field (15-of-38), it couldn’t find its long-range groove, finishing just 6-of-22 from behind the arc (27.3 percent). City shot slightly worse, ending at a 38.1 percent mark (24-of-63), but was afforded 25 more chances at scoring because of the Golden Eagle miscues and 11 offensive rebounds. JBU won the overall rebounding battle, 36-32.

Yvonte Neal paced the Stars’ offense with 18 points on a 7-of-15 shooting effort. Ouleymatou Coulibaly converted 6-of-10 from the floor and finished with 15 points while Autumn Lau came off the bench to pour in 11 points and grabbed 11 rebounds to complete the double-doubele.

John Brown will return to the hardwood quickly when it faces Wayland Baptist (Texas) on Monday (Feb. 10) at Bill George Arena. Tip-off is slated for 5:00 p.m. The Flying Queens enter the contest having just earned a win at conference-leading Oklahoma Baptist on Saturday night, 73-65. The loss ended the Lady Bison’s 13-game winning streak. John Brown defeated WBU 73-68 on Feb. 1 at the Hutcherson Center in Plainview, Texas.