Stillwater girls disappointed, but coach says dedication will carry into the future 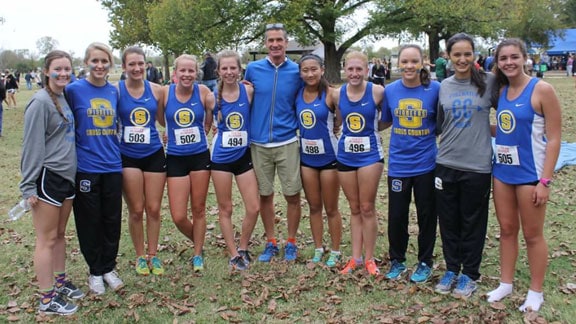 TULSA – The tension could have been cut with a knife.

The Stillwater girls’ cross-country team anxiously awaited the final results for the Class 6A East Regional Championship at O’Brien Park in Tulsa on Saturday.

The Pioneers, alongside other teams, gathered around a sandwich board directly to the north of the finish line. The fate of their season hung in the balance.

Seconds turned to minutes, and the minutes kept piling up. The chilly 51-degree temperature and overcast skies added to the stress of the dire situation.

Finally, a meet official came forth with multiple sheets of paper in hand. This was it.

Junior Elise Rackley bit her lip. She knew one of those sheets would decide the fate of her team. As the official leaned forward to post the results on the sandwich board, Rackley squeezed senior Ella Luttbeg’s hand.

“I didn’t know what was going to happen,” Rackley said. “We told each other, ‘I’m proud of you.’ That’s all we could say.”

Their eyes scrolled down the sheet, taking the time to read only the first letter of each team. The letter ‘S’ became the most important letter in the alphabet.

The page skipped before No. 7. With so much riding on that placement, the suspense seemed fitting, even though it lasted for only a moment.

“I was kind of nervous, but I knew that we all raced really well,” Luttbeg said. “But at that point, it wasn’t up to us whether we made it or not.”

Tears began to fill Rackley’s eyes. She turned to Luttbeg and senior Rachel Brown, who also had tears in their eyes. Everything they worked for had come to an end. They came up short of their goal. The look of disappointment covered their faces.

“I was annoyed,” Luttbeg said. “I knew we gave it our all, so I wasn’t disappointed in us; I was just kind of mad about how many teams were in our regional and how good they were.”

Although disappointed, Brown said she isn’t surprised the team failed to qualify.

“Just based on where I knew I was compared to Norman, Broken Arrow and some other teams, I didn’t have the highest hopes of making it as a team,” Brown said. “I was not shocked the team didn’t make it, but I was really disappointed that neither Ella nor I made it individually.”

Coach David Crynes said there is not much he can say to the girls because they care so much. He knows the girls did their best, and that is all he could ask from them. He said he believes their dedication will carry over to the underclassmen.

“That’s the foundation they’ll leave for us; if you want to run cross-country at Stillwater, you better care,” Crynes said. “Other than that, you just put your arm around them because it just takes time to get over it at this point.”