Storm break out brooms at SAU 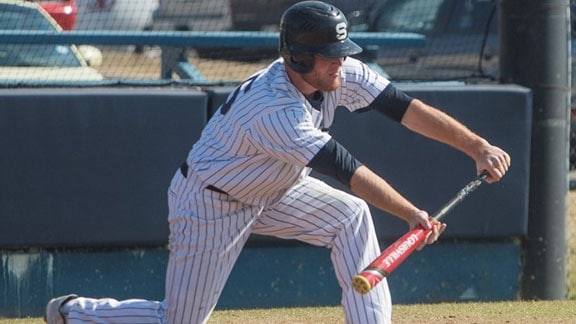 The win lifts SE to 24-18 overall on the season and 19-8 in Great American Conference play where they currently sit in third place despite the sweep due to winning percentages, with Arkansas-Monticello and Southwestern Oklahoma State also sweeping their weekend series but have three fewer games played on the year thanks to not playing each other due to a rain out.

Southeastern will have the opportunity to rectify that situation in less than a week as it will return home for its final two series, the first being against Arkansas-Monticello April 22-23 in a three-game set.

The weekend sweep is the third GAC series sweep for the Storm this season and part of the seventh conference series win as the team has gone 19-4 in league play since losing the first two games of its series against SWOSU on the final weekend of February.

The sweep also carries extra significance as the Storm have become the first team to sweep perennial favorites SAU in a conference series in the five years of the GAC and handed them their first full series sweep in conference play since 2006.

Wade turned in his second-longest outing of the season, throwing 130 pitches over 7.2 innings and scattering just a pair of hits while striking out nine. He did surrender six walks and had to work out of a bases-loaded jam in the first inning to keep SAU scoreless.

Michael Brinska came on in the eighth and recorded a strikeout with the bases loaded to keep the shutout alive, but in the end was touched for a run on two hits in 1.1 innings with a pair of strikeouts.

Tim Hunter was the only SE hitter to collect multiple hits as seven of the nine starters recorded a hit.

Greg Husnander and Logan Terwilliger had a pair of RBI each, whileKaleb Thomas drove in one.

A Terwilliger sac fly put SE on the board in the top of the first and that lead doubled to 2-0 when Thomas took advantage of an error to score.

Southeastern did its damage in the second inning as Connor Counceled off with a single followed by a Hunter walk and a Bryson Allen single to load the bases.

Dylan Helms then drew the bases-loaded walk to make the score 3-0.

Following a pitching change Thomas would draw his own walk and push it to 4-0.

Twerwilliger was then hit by a pitch for a 5-0 lead and two batters later Husnander connected on a two-run single to left to plate Helms and Thomas for a 7-0 lead.

That’s where the game would sit as neither team even threatened to score again till the bottom of the eighth inning when SAU loaded the bases before Brinska shut the door on the threat.

SE would load the bases in the top of the ninth but was unable to get a run in as the inning ended on a double play, while the Muleriders got an RBI groundout to score their only run of the game in the bottom of the ninth to fashion the 7-1 final score.