Storm disappointed, but not done yet 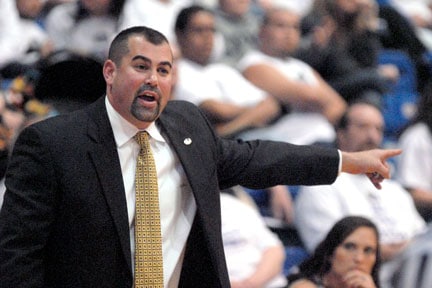 The Southeastern women’s basketball team has compiled 60 wins in the last three seasons.  And although a core group returned for the 2011-2012 campaign, the Savage Storm is looking at a record of 9-13 overall, 5-7 in the Great American Conference with the season winding down.

SOSU head coach Darin Grover did not hesitate in his assessment of the year to this point.

“In a word, disappointing,” Grover said.  “We had a lot bigger expectations of what this year would be.  And the reality has set in that it’s not there.

“We had five seniors come back.  Actually we had six, but one of them decided not to play right before the season started, and that was a big loss.  And for whatever reason, our team just has not gelled like it has in the past.”

Grover clarified that he is let down with the way the season has unfolded, and not with the players themselves.

“The results are disappointing,” Grover said.  “But this group has been great about practices.  They come in every single day and work hard.  I don’t have any complaints about that.

“But when gameday rolls around, we haven’t been able to put it together.”

Grover also pointed out that this group of Storm players has been the one to put Southeastern back on the winning side.

“Those seniors have averaged 20 wins a year,” Grover said.  “They’ve had two trips to the NCAA Tournament and they have really been the group that has put this program back on the map.  And we really don’t have an explanation as to why it’s been such a frustrating year.  We just haven’t been able to score.

Coach Grover pointed to his team’s inconsistency on offense as a big reason for the Storm’s struggles, but acknowledged also that the loss of senior Whitney Coffey for the last six games has been a factor.

Coffey started the season on a tear, taking home recognition of the GAC Player of the Week the first two times it has been awarded.  However, she was injured in practice diving for a loose ball and partially tore ligaments near her left elbow, which is also her shooting arm.

“She started off very strong, and has been very important to us,” Grover said.  “She could be back and she’s starting to practice a little bit.  We’re waiting to see.  It’s kind of a day-to-day thing.

Senior Ali Stone also as sidelined. A knee injury has kept Stone out of the last two games and her date of return is still unknown.

Grover pointed out that other players have stepped up their games recently, including sophomore guard Ronay English.  And freshmen Brooklyn Horton and Haley Schaefer have made big contributions of late.

2011 brought many changes for all of the athletic programs at Southeastern with the move to the Great American Conference.  And Grover said that the change is good, but there are challenges.

“I like the new conference,” Grover said. “It’s always an adjustment getting to know new coaches and new schemes.”

And Grover knows that the GAC is a strong conference, even in its first season.

“I’ll tell you this about this conference: Some people may have thought that things might have been easier in the conference and that is not the case whatsoever,” Grover said.

“Arkansas Tech has spent a lot weeks at No. 1 in the country and they’ve made the last two Elite Eights.  And they’re not even sitting at the top of our conference right now.

“Southwestern is having a great year and Harding is, too.  Ouachita Baptist has been to the NCAA Tournament two out the last three years.

“So you’re not looking at a transition from a powerful conference to a lesser conference.  In fact, I’d say it’s a lateral move at best, and maybe, to some degree it’s been a little rougher not knowing what to expect each week.”

With the less-than-stellar record and no automatic bid to the GAC Tournament champion this year (the GAC is in a transitional phase in it’s inaugural season), Southeastern will not be getting a bid to the NCAA Tournament this season.  But Grover’s teams still has goals.

The Storm close out the regular season with three straight games at Bloomer Sullivan Arena and end the year at Ada against archrival East Central.

“We’re trying to finish as well as we can, and even place ourselves as high as possible in the tournament.  And hey, we’re the only team in the conference that has played in Bartlesville before.

“Is that an advantage?  Maybe.  We’d like to think so.

“And we believe that there isn’t a team in our conference, not matter how strong our conference is, that we don’t think we can beat.”

Southeastern gets the final part of the season underway tonight at home against the powerful Arkansas Tech Golden Suns.  The game is scheduled to start at 5:30 p.m.