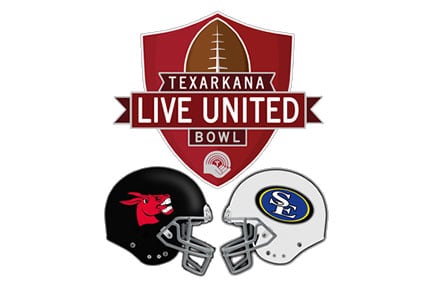 TEXARKANA, Ark. – Southeastern’s Ryan Polite posted 307 yards of total offense and scored three touchdowns, but it was not enough to offset Central Missouri’s 345 rushing yards as the Savage Storm fell to the Mules, 48-21, in the Live United Texarkana Bowl on Saturday afternoon in Texarkana, Ark.

Polite ran for 59 yards and three scores on the afternoon, and added a 22-for-42 effort passing for 258 yards.

Anthony Foster posted 108 yards on six catches in his final game, while Franky Okafor added five grabs for 68 yards and Kaymon Farmer hauled in five for 46.

Overall, the Storm tallied 418 yards of offense, picked up 26 first downs and threw for 283 yards as a team.

However, UCM would finish with 625 yards of offense, with 345 coming on the ground and 280 through the air.

SE’s defense was led by Thomas Curry who had 12 tackles, while Chad Tuckerand Bobby Jackson each added eight.

The Mules were led by Live United Bowl MVP LaVance Taylor who rushed for 264 yards and a touchdown and added 87 yards and a TD on three receptions.

UCM scored first on a 33 yard Will Mondragon field goal at the 12:12 mark of the first half, but the Storm answered by driving 62 yards on nine plays capped by a Polite six yard run to open up a 7-3 lead.

That would last just under four minutes until the Mules scored their first touchdown on an eight yard pass from Hawk to Cullen Rosine to make the score 13-7.

Central Missouri would add another Mondragon field goal and a 55 yard Taylor TD run in the second quarter to hold a 20-7 lead at half.

They would add a pair of scores to open the third quarter on Hawk passes to Kyle Echols and Taylor to jump out to a 34-7 lead.

Hawk would put UCM back in the endzone with a seven yard pass to Tristan McLelland, but Polite would answer with his third score of the day, this one from six yards out to cap a four play, 49 yard drive and close the gap to 41-21.

However, UCM would have the last word as Sean Gorman scored on a run from a yard out to fashion the final score of 48-21.