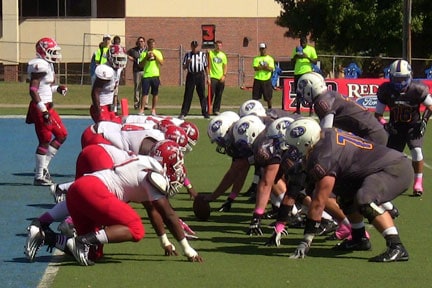 Durant – The Savage Storm scored early and often in its only out-of-conference game in 2014.

Southeastern took down in-state opponent Bacone, 53-7, in the first meeting between the two since 1946.

SOSU (2-3) exerted itself on both sides of the ball and put up 23 points in the first quarter.

Less than a minute fter a Jake Walters field goal, Raheem Wilson picked off Corey Ward’s pass and returned it 28 yards for the score as the Southeastern was on top by 10 less than seven minutes in.

Devlon Wortham got back on track with 83 yards on 11 carries and three touchdown runs.  His first two came in the first quarter as the Storm separated themselves from the Warriors.

Southeastern’s defense was big on the day and Storm coach Bo Atterberry spoke about that.

“We had a better week of preparation,” Atterberry said.  “We’re a little bit thin on that side of the ball and we knew that and we needed a good week of practice.  Our guys were really focused and they executed really well.”

Devan Drake blocked not one, but two punts in the second quarter, setting the Storm up in great field position deep in Warriors’ territory.  Bacone’s defense held its own, and kept SOSU to just three points following the blocks.

Bacone (2-3) put its first points on the board in the third quarter.  Omar Kharroub came in for Ward, who had been roughed up, and connected with David Chapman for a 33-yard touchdown strike.

The Storm defense keyed on Chapman throughout the day, limiting the touches for the Warriors’ standout receiver to just three for 64 receiving yards.

Victor Smith had 49 yards rushing for the Warriors on 19 carries, but as a team BC was held to 35 yards.

Southeastern’s Jake Walters accounted for 17 points in the SOSU win.

Jake Walters accounted for 17 points for the Storm.  He was successful on four of five field goal attempts and made five of six PATs.

And freshman quarterback Dru Smith picked up his first touchdown pass of his career, but probably not as he had envisioned it.

Smith was the holder on a field goal attempt and took a bad snap, rolled out and found Xavier Smith in the endzone, accounting for the final Storm touchdown of the afternoon.

Southeastern was able to get many players in the game and Atterberry said he that was appreciative of that, going back into Great American Conference play next Saturday.

“That was nice. And hopefully we’ll get some guys back healthy.”

Southeastern stopped a two-game slide and go back on the road to face Southern Nazarene in Bethany.

Bacone has now dropped three straight, but will open its Central States Football League portion of the schedule at home in the Indian Bowl against Texas College.