Storm play tight one with No. 9 Reddies, but fall late at home 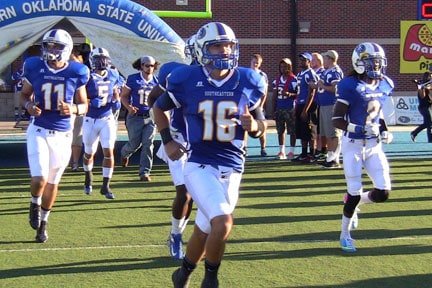 DURANT – Logan Russell tied an 86-year-old record with a 100-yard interception return in the third quarter, giving Southeastern a 28-24 lead over Henderson State.  But the Reddies collected themselves and fought back and then hung on for a 44-35 victory at Paul Laird Field in Durant.

Southeastern fell to 1-2 on the season and in the Great American Conference, while the ninth ranked Reddies moved to 3-0 and 2-0 in league play.

Russell’s return was a big play, as HSU had a lead and the ball at third-and-goal at the Southeastern 4-yard-line.  It seemed likely the Reddies would go up by at least six and maybe 10 points.  But Russell stepped in as the linebackers shifted in coverage and made a thrilling run down the right side of the field, changing direction at midfield and headed for the left front pylon and went in for the score.

SOSU coach Ray Richards spoke highly of the athletic ability of his senior.

“Logan is fast,” Richards said.  “People don’t realize just how fast he is.  So it didn’t surprise me when he caught that he scored. He can run.

“It was the first interception of his career and it’s one he won’t forget.”

But the momentum changed direction almost immediately after that.  SOSU was flagged with an unsportsmanlike penalty on a sideline violation.  The players on the Storm side were jumping around as Russell made his long and exciting run down the field and the line judge ran into one of them, that was a little out of the box.

After the kickoff, HSU started the next possession on the Storm 42.  Henderson would score the field goal and then two touchdowns, to put up 17 straight and regain a lead it would not relinquish.

SOSU opened the season with what could be considered an upset over Southern Arkansas.  A win over HSU would definitely have been one.  Richards said that his team came prepared to play.

“We played our hearts out,” Richards said.  “We had a great week of practice and we were really prepared this week.

“To me, there were a couple of critical things that happened.  (There was) that one penalty on our bench and then we had to kick off from the 20 and they got the ball with great field position and that cost us.”

HSU quarterback and Harlan Hill candidate Kevin Rodgers was 27-of-50 through the air for 384 yards and 1 TD pass and an interception.  But SOSU’s Nick Sioson had comparable – actually, better – numbers with a 34-of-58 performance and four touchdowns and two INTs.