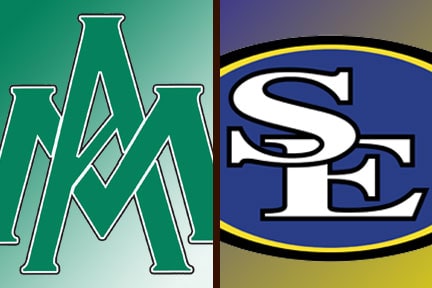 DURANT – It was a banner day for Southeastern as milestones were reached and the Savage Storm seniors were able to wrap up the home portion of their playing careers with a 44-26 win over Arkansas-Monticello on Saturday afternoon at Paul Laird Field.

The win lifts the Savage Storm to 6-4 on the year and in Great American Conference play and closes out a perfect 5-0 season at home, stretching its home winning streak to seven games dating back to last season.

SE will be back on the field for its final regular season contest on Nov. 12 when it travels to Ada, Okla., for the Great American Classic against East Central in the 100th meeting all time between the storied rivals.

It was a win in the final home game for nearly 20 seniors who will have won the final seven games played at Paul Laird Field and a total of 14-3 in the last three seasons, building a true home field advantage.

A pair of those seniors added another milestone to their long list of accomplishments this season as Ronnie Green and Devlon Wortham each passed the 1,000 yard rushing mark in the contest, marking just the second time in school history two backs in the same backfield have reached that mark and the first time in the history of the GAC.

Wortham turned in 94 yards in the contest on 21 carries and listed his season total to 1,043, marking his second career 1,000 yard season.  He also scored four rushing touchdowns and in doing so surpassed another Earnest Hunter record with 17 rushing scored on the season, passing the mark of 16 posted by Hunter in 1994.

Both runners have entered the top five in single season running efforts.  And while Wortham continues to expand his career record rushing yardage number which is up to 3,356, Green has now climbed into the all-time top-five as well and is now fourth with 2,490 yards.

Even C.B. Cantwell got into the running spirit, shaking off the lost yardage of three sacks to finish with 32 yards on seven carries thanks in large part to a 41 yard quarterback read option in which he weaved his way down the field.

SE finished with 304 yards on the ground, besting the 300 yard mark for the third time this season.

The Storm also had some success through the air where Cantwell was an efficient 14-of-20 for 212 yards and a pair of touchdowns.

He hit six receivers on the day, but 10 of those catches were split between Kaymon Farmer and Bryce Steele.

Farmer had just four of them but went for 67 yards, while Steele added 59 yards on his six catches with a touchdown.

Green added a touchdown reception on his one catch of 22 yards.

Joel Carlos added a 37 yard field goal and moved his mark to 13-of-15 on field goal tries and is now just behind Milam Smado for the most field goals made in a season as he connected on 17 in 1999.

He also added a 5-for-5 effort on PAT kicks.

Defensively the Storm  got back to its big play self from early in the season by forcing three turnovers.

The first was textbook as Raheem Wilson snagged his fifth interception of the season, while the second one was not so textbook as defensive lineman Tahawin Smith blew up a screen pass attempt and hauled in the interception, the first of his career.

The Storm would also force a fumble late when Chip Jones would knock the ball loose on a punt return with less than a minute to play and Devon Blanton would fall on it which led to the Storm taking a pair of knees in the victory formation to seal the win.

Rob Garnder turned in a team-high nine tackles, while Jones was on his heels with seven and a forced fumble.

Wilson was next in line with five, joined by Kevin Jones, Jarrett Ingram and Bobby Jackson, while Wilson also added a pick and four pass breakups.

Wilsons pick would end the first UAM drive of the game just four plays in, but after driving down to the four yardline SE would give it back when Green would fumble on the goal line which was recovered in the endzone by UAM for a touchback.

SE would hold and after a shanked punt by UAM’s Chris Manser it was Cantwell who carried the ball 41 yards down to the UAM four yard line.  Two plays later Wortham punched it in for a 7-0 lead.

The Storm would get another stop and cap the following drive early in the second quarter with a Carlos 37 yard field goal to open up a 10-0 lead.

The Boll Weevils would answer on their next drive by going 86 yards on seven plays before Imani Riley scored from five yards out on the ground to cut the SE lead to 10-7.

After another fruitless Storm drive UAM would take the lead at 14-10 on a 77 yard Cole Sears to Trevon Smith connection with 7:50 to go in the half.

SE recovered and after converting on 4th-and-1 at the UAM 13, Cantwell would hit Steele for a nine yard TD toss and a 17-014 lead at the 3:11 mark before halftime.

With the prospect of getting the ball back not particularly good in the half, Smith would change that with his screen pass interception at the UAM 28 yard line and was brought down at the 20, fumbling in the process, but Sione Taufahema would come up with the ball to preserve the possession.

Two plays later Wortham would score from nine yards out to put SE up 24-14 which would hold to be the halftime score.

SE would go 55 yards on seven plays on its first drive of the second half, scoring on a 22 yard Cantwell to Green pass that also converted a 3rd-and-9 situation and gave the Storm a 31-14 lead.

UAM would answer with another Riley rushing score, but DaMarius Lavender would block the PAT and the lead would stick at 31-20 with 9:55 to go third quarter.

The Storm would then have an immediate answer by taking ts ensuing drive 60 yards on eight plays with Wortham once again cashing in, this time from 26 yards out to take a 38-20 lead.

Neither team would score for the remainder of the third quarter, but a Storm turnover to open the fourth quarter would get taken the other way on a 15 play, 66 yard drive before the Weevils scored, but the Storm would stop the two-point conversion try to make the score 38-26.

Wortham would put the icing on the cake on the next Storm drive as he capped a 58 yard drive with a three yard rushing score to open up a 44-26 lead which would hold to be the final.