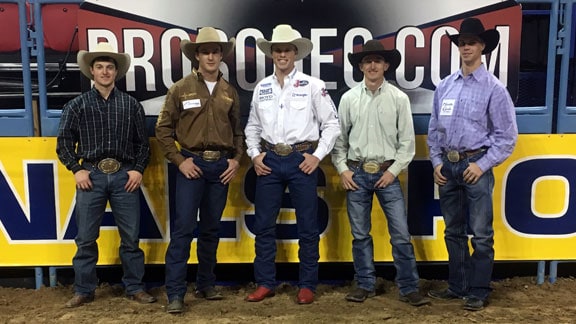 GOODWELL — Rodeo is a family affair.

The Etbauer brothers dominated the saddle bronc riding through the 1990’s while the Wright family made headlines during this year’s Wrangler National Finals Rodeo (WNFR). Still, there is another family that makes its supremacy felt year after year in the professional rodeo ranks that mainstream media overlooks. It is not a bond by blood, but rather cowboys brought together by a small Oklahoma town.

Five members of the Panhandle family found success inside the Thomas and Mack during the 2016 WNFR Dec. 1-10.

Oklahoma Panhandle State University has long been known for its bronc riding abilities so it is only fitting that three of the 15 cowboys qualified in the saddle bronc riding hailed from Goodwell.

Clay Elliott’s hot streak from his win at the Canadian Finals Rodeo turned cold during the opening night of the WNFR when Bridal Shower of Dakota Rodeo bettered the cowboy’s efforts. Elliott didn’t let the slow start put a damper on his first qualification to the big dance. The former collegiate champion went on to place in five rounds with his biggest paycheck coming from round 8 with a second-place finish. Elliott pocketed $59,711.53 over the ten nights including his qualification bonus of $10,000.

Even while in college, Allen Boore was a picture of consistency. The pattern held true during his first WNFR qualification as the Utah cowboy covered 9/10 broncs. He snatched paychecks in four rounds, but more importantly, placed third in the aggregate: a $43,153.85 paycheck. With his qualification bonus, Boore surpassed the $100,000-mark for the 10 days.

Sneaking into the WNFR in the 15th position, Jake Watson quickly proved he deserved to ride with the best. The Canadian cowboy was leading the aggregate until Tuca’s Warsong caused Watson to meet the Thomas and Mack dirt for the first time in the ninth round. His total of 747.5 points on nine head landed the WNFR rookie in second place in the aggregate when the final curtain fell. Watson was the highest-earning Panhandle State cowboy with a 10-day salary of $136,006.41.

Joe Frost has become quite comfortable inside the Thomas and Mack. During his third trip to the WNFR, Frost made the 8-second whistle on five bulls to place fourth in the aggregate. Frost accumulated $100,538.47 including the $10,000 qualification bonus.

When the final chute gate was pulled, the Panhandle family of cowboys earned a combined $481,044.86 at the 2016 WNFR. These former Aggies are paving the way for the next wave of talent coming out of our little Oklahoma town.