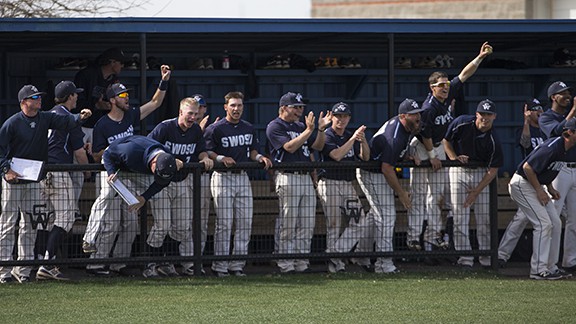 BETHANY, Okla. – SWOSU Baseball left 13 runners on base, but still had enough juice to earn a 5-2 victory over Southern Nazarene on Sunday afternoon. The victory completed a series sweep and marks the fourth GAC series win for the Bulldogs, who improve to 16-7 (9-3 GAC) on the year.

Southern Nazarene scored the game’s first run, pushing across a run in the bottom of the first inning before SWOSU scored the next three to gain the lead. Haden Houska had an RBI single in the second inning, scoring Trent Troxell while Tanner Dearman brought Joel Baxley home on a squeeze play to make it 2-1 in the second. The Bulldogs added an unearned run in the third inning as Jacob Spring stole third and scored after a bad throw by the catcher.

Four different Bulldogs had two hits in the days (Dearman, Polston, Baxley, Faddis) as SWOSU finished with 11 base hits in the contest. SWOSU also drew three walks and took advantage of four SNU errors to earn the victory.

Devin Ring got the start for SWOSU and lasted 4.1 innings on the mound, allowing eight hits and two earned runs before Ben Schweinfurth (3-0) closed things out and picked up the win. Schweinfurth allowed just one hit and struck out three over the final 4.2 innings of action.

“To go on the road and get a sweep is never easy and this weekend was no different,” SWOSU Head Coach Zack Saunders said following the series. “I’m very proud of this group and their ability to grind out wins. We still have a lot to get better at, but I like our toughness and the way we are starting to play.”

With the win, SWOSU improves to 16-7 on the year and they remain tied atop the Great American Conference standings with Arkansas-Monticello at 9-3, percentage points ahead of Oklahoma Baptist and Southern Arkansas. The Bulldogs are on the road on Tuesday, facing Science and Arts in Chickasha at 4:00 pm before hosting Oklahoma Baptist next weekend for a three-game series.