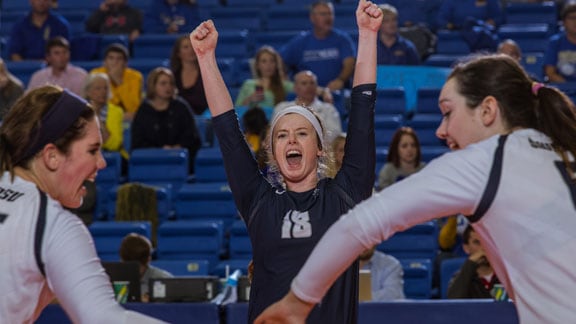 HOT SPRINGS, Ark. – The journey to the program’s first championship is complete after SWOSU Volleyball rallied in the fourth set to defeat Southern Arkansas 3-1 on Saturday afternoon at Bank of the Ozarks Arena in Hot Springs.

To completely grasp just how far SWOSU Volleyball has come for this moment, however, we first must look back at where they started. The Bulldogs fielded their first team in the fall of 2005, led by Head Coach Bo Pagliasotti, who led the program to 68 victories in seven seasons, his last of which was 2011, the first season of competition in the Great American Conference.

As Pagliasotti stepped aside to focus on teaching at SWOSU, his longtime assistant coach Josh Collins was elevated to the position of Head Volleyball Coach in January of 2012. In his first season, the Bulldogs won 13 games and advanced to the semifinals of the GAC Tournament for the first time in program history before falling to Harding in five sets on the home court of Lady Bisons.

Kaila Lancaster, now the program’s all-time leader in digs, was a freshman on that squad. Saturday, after a four-set victory and a long embrace with her younger sister, Klemson Lancaster, the duo left the floor at the Bank of the Ozarks Arena as Great American Conference Champions.

The players on the 2015 SWOSU Volleyball team have gradually been put in place like a puzzle, with the final piece being the hardware given to Coach Collins and his team by Great American Conference Commissioner Will Prewitt on Saturday afternoon.

Ariana Olson, who missed the 2013 season with injury, is the only other player remaining from Collins’ first season while Carly Zak – now the program’s career leader in kills – joined the program in 2013. Now a three-time All-GAC selection, Zak added a new recognition as she was named to the GAC All-Tournament team after putting down 14 kills with 14 digs, five blocks and one service ace in the championship game.

DeLayni Fine joined the Bulldogs in 2014 and has been at her best late in her sophomore season. She totaled six kills and six blocks in the championship match, finishing with 20 kills and 12 blocks for the tournament.

The other pieces of this puzzle were added following a 2014 season that saw the Bulldogs finish 8-19 after an opening-round loss at the tournament to eventual champion Arkansas Tech. With his team losing six seniors, Collins hit the recruiting trail hard and came back with several players who played pivotal roles on Saturday.

Kayla Hebert – who was named the GAC Tournament’s Most Valuable Player – came to SWOSU after two seasons at Cameron and she gave a championship effort with 42 assists and 27 digs against Southern Arkansas. Joining Hebert in transferring to SWOSU were middle hitters Kelsi Schmidtberger and Paige Holt – who combined for 17 kills and 12 blocks on Saturday – and Lindsey McCauley, who set a new career-high with 17 digs in the championship match.

Four freshmen on this year’s team have also shown themselves to be capable of filling their roles, which are likely to expand as they get further into their career. Jill Green led the Bulldogs offensively on Saturday by setting a new career-high with 16 kills, giving her 34 for the tournament as she hit .216.

As fall camp approached before the 2015 season, Coach Collins and his staff, consisting of Pagliasotti and graduate assistants Christina Darras and Caitlin Ogletree, felt like their team had the potential to be special. They started the season 7-7 after splitting a triangular match at West Texas A&M, but then the team got on a roll, the likes of which SWOSU Volleyball had not previously seen. The Bulldogs won nine of their final 11 games to close out October, heading into the final month of the regular season with lofty aspirations.

SWOSU split the final two games of the regular season, defeating East Central on Senior Day before a thrilling five-set victory at Northwestern Oklahoma State to close the regular season and earn the No. 3 seed in the GAC Tournament, with a rematch against the Rangers looming. Prior to this weekend, the No. 3 seed in the tournament had never advanced past the semifinals, giving SWOSU another piece of history to bring home with them.

After dropping the first set to Northwestern on Thursday, SWOSU found their groove and got on a roll that included winning six straight sets as they defeated the Rangers 3-1 and Southern Nazarene 3-0 to advance to their first GAC Tournament Championship match. Awaiting them was a team with a pair of equally impressive victories as Southern Arkansas dispatched of Harding (3-2) and GAC regular season champion Arkansas Tech (3-1) to also reach their first-ever title game.

The teams started slow on Saturday, feeling each other out in a match that turned into a defensive battle as both teams recorded more than 100 digs for the match. There were two ties and two lead changes in the opening set, but SWOSU claimed the lead on the serve of Addie Aman at 7-7 and they would not relinquish. Jill Green and Carly Zak combined for 11 kills in the opening set, but it was five blocks for SWOSU that proved to be the difference as they took the lead by winning the set 25-20.

SWOSU was able to keep things rolling in the second set, despite the hitting numbers going down for everyone except Green, who continued to have success against the Muleriders with four kills on six attack attempts without an error in the set. The Bulldogs again hit well at .233 while limiting SAU with four more blocks, but it was Kelsi Schmidtberger sending SWOSU to the intermission up 2-0 with an emphatic kill off an assist from Kayla Hebert.

A slow start for SWOSU after the break gave Southern Arkansas a chance to build a lead in the third set. The Muleriders owned the second half of the set and won the final five points to force the match to a fourth set, much to the delight of the large cheering contingent of SAU fans.

The fourth set of the match defines the heart and resilience that fans have come to associate with the 2015 SWOSU Volleyball team. The Bulldogs built a lead of 12-9, but the feisty Muleriders came back and tied the set at 15-15 before going ahead 21-18 with a three-point run on back-to-back hitting errors by the Bulldogs. Coach Collins called timeout to talk things over with his team, emphasizing his biggest message to the team this season: Believe.

Southern Arkansas scored the first point after the timeout on a kill, but the next five would go the way of the Bulldogs as Paige Holt, Kelsi Schmidtberger, Kayla Hebert and Carly Zak put the dynamic attack into motion and forced SAU to call both of their timeouts in a three-point span. SAU tied the set at 23-23 after the timeout before Schmidtberger got another kill to give SWOSU their first championship point, which they fought off as they hit through the Bulldogs block and forced extra points.

Tied 24-24, Hebert called the number of her top hitter, finding Zak with a good matchup on the right side that she turned into the 25th point of the set, giving the Bulldogs another chance to close out. An aggressive serve from Zak provided a free ball for SWOSU and Hebert this time dialed up an opportunity for Schmidtberger to be the closer as her attack bounced off the block and to the ground to cement the Bulldogs’ Championship run.

For their efforts, Zak and Schmidtberger were named to the All-Tournament Team, which was highlighted by their teammate and tournament MVP, Hebert. Joining them on the All-Tournament Team were Serena LeDuff and Hannah Rice of Southern Arkansas, who finished with 18 kills and 30 digs, respectively in the championship match, along with Abbey Bell of Southern Nazarene and Katie Huff of Arkansas Tech.

Tears, hugs and screaming ensued as SWOSU Volleyball claimed their first-ever conference championship and a chance to appear in the NCAA Division II National Tournament for the first time in program history. An announcement on the pairings for the bracket will come on Monday evening, giving the Bulldogs plenty of time to celebrate their victory before worrying about their next opponent.

As is his nature, Coach Collins graciously accepted the praise that comes with a championship but first tipped his cap to the Bulldogs opponent, Southern Arkansas, when he was interviewed by the GAC Sports Network.

“My hat’s off to Southern Arkansas,” Collins said. “Until I saw 26-24 on the scoreboard, I was prepared for them to keep coming at us. That’s a tribute to Coach (Steven) Gream for the way he runs that program, they had a big match yesterday and they came back strong today.”

In the end, however, it was Coach Collins and his fourth SWOSU Volleyball squad that got to celebrate their school-record 22nd win the same way they’ve celebrated each one along the way: with a rendition of the SWOSU school song. The final words of the song seem especially fitting on this day as the team yells, “We’ve got the vim; We’re here to win; For this is old Southwestern’s day!”