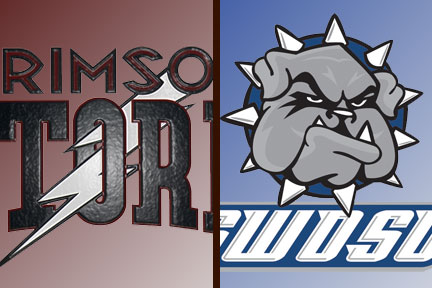 WEATHERFORD – The SWOSU Football team took full advantage of a perfect afternoon on Saturday, dismantling Southern Nazarene 73-7 for their fourth straight win at ASAP Energy Field. In the win, the Bulldogs scored their most points in the NCAA era – third-most all-time – and had their largest margin of victory since 1969.

After a shaky start that featured back-to-back interceptions thrown by SWOSU quarterback Marc Evans, the Bulldogs found their rhythm and scored on five of their next six drives, including four touchdowns. JR Omigie and D.J. Jones were the recipients of touchdown passes from Evans in the first quarter as the Bulldogs took a 14-0 lead after one quarter. That score ballooned to 31-0 at the break after two Karltrell Henderson touchdown runs and a 34-yard field goal from Dalton Jackson.

Jones got the scoring started again after halftime with a 54-yard punt return that made it 38-0 and gave him the first touchdown on a punt return since Patrick Weaver in 2007 against Northwestern Oklahoma State. SNU got their lone points in the third quarter as they capped off an eight-play drive with a 15-yard touchdown pass. It was all SWOSU from that point, however, as the Bulldogs closed the game with 35 unanswered points.

Kenneth Martey capped off a nine-play, 42-yard drive with a touchdown plunge from one-yard out right at the end of the third quarter before SWOSU called on Kedron Banks as their closer in the fourth. Banks took over in the backfield for the final period and took his first two carries for touchdowns of 60 and 56 yards. He added a third touchdown run with 4:53 to play, finishing with eight carries for 144 yards and three touchdowns – all in the fourth quarter.

Among the NCAA era records set by the SWOSU offense on Saturday included the most yards of total offense (659), most rushing touchdowns scored (six), most all-purpose yards gained (807), most touchdowns scored (10) and most points scored (73). Additionally, the 73 points scored is the third-most in the 107-year history of the program, and their first time scoring better than 70 points since 1922.

Not to be overshadowed, the SWOSU Defense also put together a dominating performance, holding Southern Nazarene to seven points and barely two yards per play as the Crimson Storm netted only 152 yards of total offense. The Bulldogs defense has now held two of their last three opponents to fewer than 10 points, a feat that had not been accomplished since the opening two games of the 2007 season.

Evans finished the game 23-for-35 passing for 325 yards and three scores, his fourth 300-yard passing effort in seven games as a Bulldog. His primary receiver on the day was Omigie, who had five receptions and one touchdown, while Jones had four receptions for 98 yards and two scores. SWOSU again spread the wealth to the bevy of wideouts, with 11 different players catching a pass in the contest.

Banks led the SWOSU rushing attack – which averaged 7.5 yards per carry for the game – with his 144 yards and three touchdowns on just eight carries, but all four running backs had a strong day running the ball. Martey carried a team-high 15 times for 78 yards and one touchdown while Kwame Tate and Henderson totaled 56 and 43 yards, respectively, on just seven carries apiece.

As has been the case all season, Conner Bays led the Bulldogs defensively with nine tackles, one tackle for loss and his second interception of the season. His partner at safety, Kapena Olsen, also grabbed his second interception of the season to tie Bays for the team lead. Colton Wright had six tackles and one tackle for loss while George Woods had two of SWOSU’s 11 tackles for loss and one sack.

The win improves SWOSU to 4-3 on the year, moving the Bulldogs within one game of second place in the Great American Conference standings. The Dawgs also remain unblemished at 4-0 on their home field, where they will return for Senior Day in two weeks. In the meantime, SWOSU heads to Shawnee next Saturday, looking for their first road victory of the 2015 season at Oklahoma Baptist.