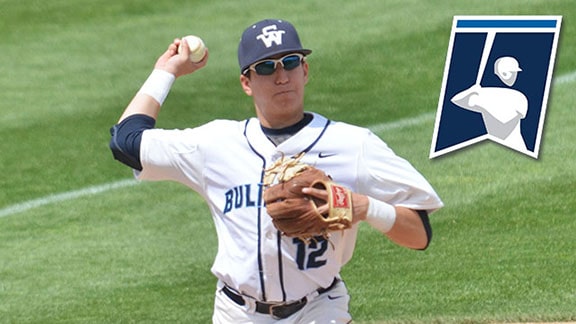 ST. CLOUD, Minn. – SWOSU Baseball found themselves in a ‘Dawg Fight’ on Friday, facing the Bulldogs of Minnesota Duluth in an elimination game at the NCAA Central Region Tournament. While No. 20-ranked and No. 3-seed UMD was playing closer to home turf, it was the visiting Bulldogs of SWOSU who earned their first-ever NCAA postseason victory, topping the Bulldogs of UMD by a score of 6-3.

Struggles in the first inning cost SWOSU in their regional opener against Central Missouri, but the script was reversed on Friday as the Bulldogs got off to a hot start against UMD. Starting pitcher Gunnar Cook worked a quick first inning, getting back-to-back strikeouts against the mighty UMD offense to bring the Bulldogs to the plate with no score.

In the bottom of the inning, SWOSU’s first four batters reached base and the Dawgs went up 2-0 on a two-run double from Korbin Polston, the third batter of the game. Jacob Spring walked and moved into scoring position along with Polston, with both runners coming home to score on a two-run single from Greg Bruno that upped the advantage to 4-0 after one inning of play.

Nobody in St. Cloud on Friday expected the Minnesota Duluth offense – which is ranked second in NCAA Division II for runs scored – to go quietly and the Bulldogs would not. UMD scored two runs on three hits in the second inning and added another run on a single in the fourth to get within one of SWOSU at 4-3.

SWOSU left the bases loaded in the bottom of the fourth and back-to-back walks issued by Cook gave UMD two runners on with one out in the fifth. It was at that point that GAC Coach of the Year Zack Saunders made a call to the bullpen, bringing in senior reliever Ben Schweinfurth to get the Dawgs out of the jam. Schweinfurth would quickly do just that, getting a 4-6-3 double play to end the inning and the UMD threat.

Both teams worked quickly over the next few frames, with neither team putting together a threat until the bottom of the seventh. Joshua Santos stepped to the plate to lead off the bottom of the seventh for SWOSU and he got to touch them all with his second home run of the season, a lined shot over the left field wall that added an insurance run and made the score 5-3. Polston would follow that with a single, forcing UMD to change pitchers but Duluth would get out of the jam with a double play ball.

With SWOSU on the verge of the programs first-ever NCAA postseason victory, Schweinfurth remained steady and retired the first 11 batters he faced to get the Dawgs into the ninth inning. His offense again added an insurance run in the bottom of the eighth, with Bruno scoring on an infield groundout by Tanner Dearman while CJ Faddis was right behind Bruno but thrown out at the plate to end the inning. The extra run gave SWOSU an advantage of 6-3 heading to the ninth.

Schweinfurth got a fly out for the first out in the ninth before UMD’s Matt Vogt got their first hit off the SWOSU reliever with a one-out single. Schweinfurth then struck out pinch hitter Cory Krolikowski for the second out of the inning, but UMD added another single to bring the potential tying run to the plate and Central Region Player of the Year Alex Wojciechowski to the on-deck circle. SWOSU would not have to face the nation’s leader in home runs and RBI, however, as Schweinfurth struck out Grant Farley to end the game and allow his team of Bulldogs to live and fight another day.

SWOSU got eight hits in the game, with multi-hit games from Santos and Polston, but still left seven runners on base. The Bulldogs chased UMD starter Spencer Diedrich after 3.2 innings and got three hits and two runs off of Duluth’s bullpen. Bruno and Polston each had two-RBI games while Dearman and Santos had an RBI apiece.

“We’ve really been waiting on that one,” Zack Saunders said after earning his first postseason victory as the Bulldogs’ head coach. “We were able to get some guys on base early and give our hitters a chance to bring home some runs and they came through today. We knew how offensive of a group Minnesota Duluth could be so we knew we had to keep scoring and we did enough of that to get the win.”

Cook and Schweinfurth combined to allow seven hits and three runs against the high-powered offense of Minnesota Duluth. Cook allowed five hits and three runs in 4.1 innings, but had control issues and allowed five walks in the game. Scheinfurth (4-0) was dominant over the final 4.2 innings and earned the win after retiring the first 11 batters he faced and allowing just two hits in relief.

“Ben did a great job of changing speeds today, trying to keep the ball down in the zone to limit that offensive attack of Duluth,” Saunders said. “That’s the guy he has been for us all year, very reliable out of the bullpen and he stepped up today like a senior should in the NCAA Tournament and I’m proud of him for that.”

With the win, SWOSU improves to 34-16 on the year and sets a new single-season school record for wins in the NCAA era, the previous record being 33 wins in 2011. More importantly, however, is the fact that the Bulldogs will fight on in the Central Regional and face the loser between Minnesota State and Arkansas-Monticello at 11:00 am on Saturday in St. Cloud.