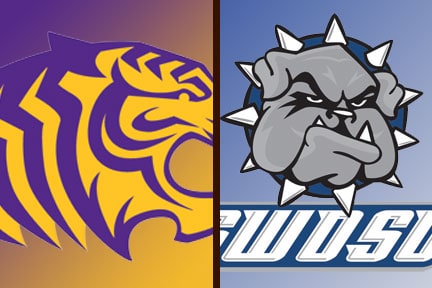 WEATHER FORD – For the second consecutive week, the SWOSU Football team scored better than 50 points and earned a league victory, making a statement with a 58-38 victory over defending Great American Conference champion Ouachita Baptist, the No. 9-ranked team in the latest AFCA Top 25 poll.

The victory is the first by the Bulldogs over Ouachita Baptist since the inception of the Great American Conference in 2011 and it snaps a 12-game regular season winning streak by the Tigers, who won the GAC and advanced to the NCAA Division II playoffs last season.

Marc Evans again directed the efficient SWOSU offense magnificently as the Bulldogs rolled up 549 yards of total offense, including 365 yards through the air. Evans had his second straight 300-yard performance, completing 31-of-46 (67.4%) passes for 365 yards and four touchdowns, all without being intercepted for the third straight game.

Karltrell Henderson did the bulk of his damage on the ground in the second half and he finished with 152 yards rushing on 22 carries along with two touchdowns, and he added a 38-yard touchdown on a screen pass that gave the Bulldogs the lead for good.

SWOSU scored first after taking advantage of two Ouachita Baptist fumbles, going on top 7-0 after Kenneth Martey scored from two yards out. Ouachita responded late in the first quarter and the game went into the second frame all square at 7-7 before the Bulldogs broke the game wide open with 28 second-quarter points.

Henderson scored his first rushing touchdown early in the quarter and added the screen pass score with 9:05 to play before halftime. Evans added touchdown passes to D.J Jones and JR Omigie late in the half as the Bulldogs took a commanding 35-17 lead to the break.

The opening drive of the second half by SWOSU was aided when Evans was hit late for roughing the passer and the drive ended in a 21-yard field goal by Michael Perez. After a Tiger touchdown, SWOSU scored the next 14 points on a 6-yard pass from Evans to Omigie and a highlight reel 60-yard scamper from Henderson. OBU added two late scores while Kwame Tate made his end zone trip as a Bulldog with a 34-yard run late in the fourth.

SWOSU’s defense was led by Conner Bays, who recorded a career-high 14 tackles (seven solo, seven assist) and 1.5 tackles for loss from the safety position while Trevon Hartfield added nine stops, one tackle for loss, a forced fumble and a pass breakup. Kapena Olsen and Gentry Rogers both picked off passes with the Tigers in the red zone while Tyler George and Jake Doyle recovered fumbles in the game.

“I told our guys to go make a statement in the fourth quarter and I think they did that,” SWOSU Head Coach Dan Cocannouer said following the game. “Our kids know what they need to do to win and now we’ve done it two weeks in a row. Our offensive line has matured a ton since the first game and they did a lot for us that helped us get the win tonight.”

With the victory, SWOSU improves to 2-1 on the year for the third straight season heading into a showdown with Henderson State next Saturday in Arkadelphia.

– SWOSU’s offense has now scored 50 or more points in two straight games for only the second time in program history. The last occurrence was in 1969, when SWOSU scored better than 50 points in three straight games to end the regular season

– Marc Evans had the first game with 30 or more completions by a Bulldog quarterback since November 9, 2013 (Dustin Stenta at Tarleton State)

– Evans also had the first four-touchdown game by a SWOSU quarterback since November 16, 2013 (Dustin Stenta at Northwestern Oklahoma State)