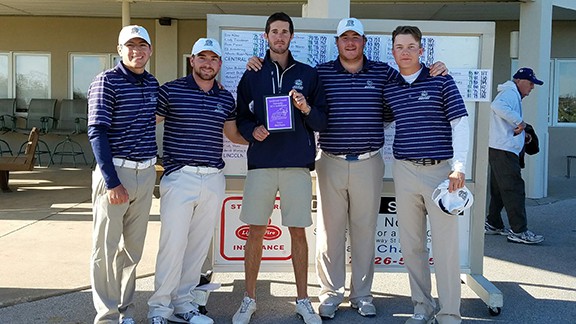 BOLIVAR, Mo. – Marques Gomez and Joby Gray tied with Eric Kline of Central Oklahoma for the individual championship at the Southwest Baptist Bearcat Invitational, leading SWOSU to the team title at the event by 12 strokes on Tuesday at Silo Ridge Country Club.

Nine of ten rounds turned in by the Bulldogs this week were in the 70’s and all five golfers who took the course turned in a round of 75 or better. Leading the way were Gomez and Gray, who both finished under par on Tuesday to earn their first individual championships with the Bulldogs.

Gomez shot a 75 on Monday, but followed it up with the low round of the week by a Bulldog when he carded a 70 (-2) in the second round. Gray was one shot better with an opening-round 74 and he improved on Tuesday with a 71 to match Gomez with a two-round total of 145 (+1) strokes. As a team, SWOSU shot 300 in the first round but improved by 12 strokes when they turned in a 288 on Tuesday and their team total of 588 placed them 12 shots ahead of Central Oklahoma.

Nicolas Cornu turned in a top-ten performance himself with rounds of 76 and 73 for a 149 (+5) total. Stefan Idstam was two shots behind and tied for 14th with rounds of 77 and 74 to his credit while Jake Duvall shot 75 on Monday but shot higher on Tuesday and finished tied for 40th place.

The tournament championship is the second by SWOSU this season, who bookends the regular season with wins after also claiming first at the season-opening GAC Men’s Preview last September. This is also the sixth top-five team finish for the Bulldogs in eight tournaments.

SWOSU now carries their momentum into the postseason, which begins in Hot Springs, Arkansas at the GAC Championships on April 24-26.