SWOSU picked off by Henderson State 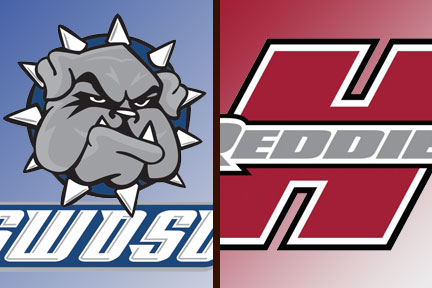 ARKADELPHIA, Ark. – After committing just one turnover in the first three games of the season and leading the Great America Conference in turnover margin, SWOSU was done in by their miscues on Saturday at Henderson State, falling 33-0 to the Reddies at Carpenter-Haygood Stadium.

SWOSU’s best chance for points in the first half was their opening drive, which was rolling along until Marc Evans was intercepted for the first time this season deep in Reddie territory. SWOSU punted on their next three drives before two more interceptions by Henderson State led to 10 of their 17 first-half points. A 49-yard screen pass from Evans to Karltrell Henderson got the Bulldogs into the red zone late in the half before a 23-yard field goal by Michael Perez was wide right as time ran out on the half.

The Bulldogs went three-and-out on their first two drives of the second half and had their best drive of the half stopped on downs at the Henderson State 24-yard line, the first failed fourth-down conversion of the season by SWOSU. Evans was picked off on each of the next two drives, with both turnovers leading to field goals for HSU and two more three-play drives allowed the Reddies to run out the clock in the fourth quarter and add 10 more points to their total.

SWOSU was held to a season-low 220 yards of total offense and they were shut out for the first time in five year, since a 23-0 defeat at East Central on September 25, 2010. Evans finished 23-for-43 passing for 178 yards, but he threw five interceptions, a school-record at SWOSU from the NCAA Division II era. D.J Jones was his top receiver, catching five passes while Henderson totaled 80 yards on three receptions. The Bulldogs were limited to just 42 yards rushing, with Henderson gaining 33 yards on 14 carries to lead the way.

Conner Bays led the Bulldog defense with 11 tackles and one tackle for loss while Austin Loomis had nine tackles, including a sack and 1.5 tackles for loss. SWOSU allowed 323 yards to the Reddies, including 227 yards on 43 rushing attempts, good for 5.3 yards per carry.

“We didn’t prepare as coaches and our players weren’t prepared to play today,” SWOSU Head coach Dan Cocannouer said in his postgame interview. “The defense played well, had little breakdowns here and there but they did some good things, the problem was our offense didn’t do anything.”

SWOSU has now evened their record up at 2-2 (2-2 GAC) on the year with both defeats coming on the road. The Bulldogs are again away from home next Saturday, with a visit to Durant to face Southeastern Oklahoma State, beginning at 2:00 pm.