SWOSU rallies past No. 2 Harding to capture GAC championship 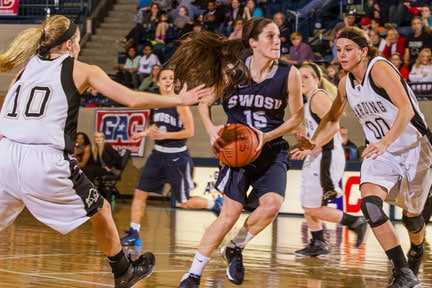 Michelle Fisher was the third senior in as many days to lead Southwestern to victory in the Great American Conference tournament.

Fisher scored 14 of her 18 points in the second half, including the go ahead layup with 55 seconds left, to rally her team to a 78-74 win over top seed Harding in the GAC championship game Sunday.

With the win, Southwestern (19-10) earned the league’s automatic bid to the NCAA Division II national tournament.  The Lady Dawgs are the No. 8 seed in the Central Region and will meet No. 1 seed Emporia State (28-3) on Friday, Mar. 14, in Searcy, Ark.

SWOSU jumped out to an early 10-point lead at 18-8 on the strength of hot shooting from seniors Sarah Mendoza and Taryn Sayama.

No. 2 Harding and GAC Player of the Year, Kristen Celsor, and GAC Freshman of the Year, A’ndrea Haney, fought back to get within a point of the Lady Dawgs, trailing 37-36 at the half.

Then the Lady Bisons took control in the second half, building a lead that reached as high as 13.

But with 7:08 remaining and trailing 69-57, Fisher drove in for a score that started a 9-0 run, which put the Lady Dawgs within three points with four minutes left.

“Seniors have to step up in a big game like this and have to be ready to play,” Fisher said.

“In the second half, once we started getting down, it hit me that if I’m not hitting shots, we’re probably not going to win this game.  and so it was very crucial that I needed to make some.

“They weren’t the threes that I normally would hit, but the layups were just as important.”

The contest went back and forth in the final minutes.  Another senior Jaimee Cohen took two big charges and hit a layup that tied the score at 74.

Following an errant pass by the Lady Bisons, Fisher took in her final layup to put the Lady Dawgs up 76-74 with 55 seconds left.

“Just estatic,” Musick said.  “And I’m just so proud.  I couldn’t be more proud of this team.

“Like I’ve said a million times, just what they’ve overcome throughout the season.  We’ve had our ups and downs.  We’ve faced injuries.  We’ve faced no one believing in us.  All kinds of different things and I think they faced that adversity head on and I think that showed today.”

Saturday’s hero, Taryn Sayama, shared a game high 18 points for Southwestern.  Sarina Sayama, who lit it up on Friday, had 11 points, as did Mendoza.

Five Harding players scored in double figures, including Haney, who also had 18, and Celsor who finished with 16.  Arielle Saunders was one of three Lady Bisons with 10 points and recorded a double-double with 13 boards.

Despite the loss, Harding (29-2) will be the host for the regional tournament.