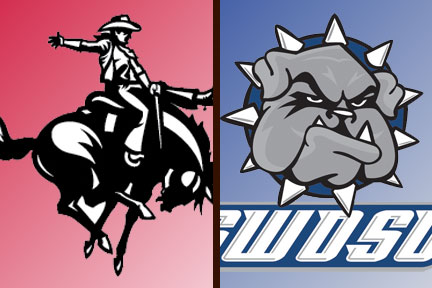 WEATHERFORD – The SWOSU Football team outscored Northwestern Oklahoma State 27-9 after halftime and pulled away for a 47-16 victory on Homecoming Saturday evening at ASAP Energy Field.

SWOSU held a 20-7 lead at halftime after getting scoring strikes from Marc Evans to Derrick Styles and D.J. Jones in the first half along with a one-yard scoring plunge for Kenneth Martey.

After the break, Northwestern got a field goal but the Bulldogs answered on a long scoring run for Martey to make it 26-10. Northwestern got their final points with 8:50 to play in the third and the Bulldogs outscored the Rangers 21-0 in the fourth quarter to run away with the rivalry win.

SWOSU accumulated exactly 500 yards of total offense, getting 274 yards passing from Marc Evans, who finished his senior season by setting a new single-season record with 3,048 passing yards. Evans completed 20-of-42 passes on Saturday night and threw four touchdown passes for the second time as a Bulldog, giving him 47 career touchdown passes at SWOSU, the second-most on the Dawgs passing list.

Kenneth Martey rushed for 133 yards and two touchdowns for the Bulldogs, going over the century mark against Northwestern for the second consecutive season. Karltrell Henderson added 59 yards on the ground, giving him 881 rushing yards this season, the fourth-highest single-season rushing total by a Bulldog in the NCAA era.

D.J. Jones was Evans’ top target on Saturday – and throughout the past two seasons – and the senior caught five passes for 102 yards in his final outing at SWOSU. Jones concludes his two-year stint with the Bulldogs by breaking the single-season receiving yardage mark after totaling 968 yards on 61 receptions this season.

JR Omigie had four receptions for 61 yards and a touchdown while Derrick Styles and Martey made the most of their lone receptions by scoring touchdowns of 14 and 8 yards, respectively.

The biggest record that fell on Saturday night was that of SWOSU’s career tackles during the NCAA Division II era. Bulldog senior safety Conner Bays – the leading tackler in the Great American Conference – entered the contest needing eight tackles to surpass Michael Hart (290, 2002-05) atop the list and he did just that during the third quarter.

Bays finished the game with 12 tackles for his 16th career double-digit tackle game, finishing his career with 295 tackles, a number that now represents the top mark for Bulldog Football. Bays also set the single-season tackles record with 128, moving past Charles Thomas, who had 122 tackles in 2004.

SWOSU concludes the 2016 season with a record of 5-6 with all games played against members of the Great American Conference. The Bulldogs finished a perfect 5-0 against GAC foes from the state of Oklahoma and they finished the season by winning five of their final seven games.