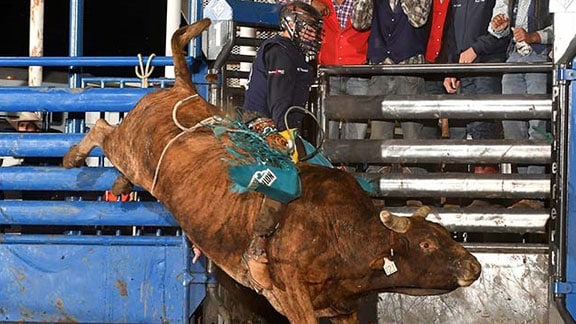 The Southwestern Rodeo Team opened the 2016-2017 in Colby, Kan., last week. OklahomaSports.Net gets you ready for the Southeastern Stampede on Oct. 6-8 with a review of the SWOSU trip to Colby.

COLBY, Kan. – The 2016-17 Rodeo season is underway after the cowgirls and cowboys from the SWOSU Rodeo team competed at Colby, Kansas over the weekend. The Bulldogs came away with a third-place finish on the men’s side, while the women’s team claimed sixth place in the opening event on the Central Plains Region schedule.

SWOSU totaled 360 points from the men’s team, getting strong efforts in bull riding and team roping. Nathan Hatchel scored 81 points to win the long round of bull riding and his score was high enough to survive a no score in the short go as he still won first place in the average. In team roping, the duo of Sloan Smith and Alex Phelps won the first round in 7.0 seconds and took third in the average with a total time of 19.7 seconds. Taran Knox added points in saddle bronc, scoring a 49 to take fifth in the long round and sixth in the average of the event.

On the women’s side, the Bulldogs scored 75 points to finish sixth at the rodeo. Rachel Pozzi won the long round of barrel racing and was third in the short round to split second and third in the average. The remainder of the points came in goat tying, where Kenzie Huffman and Stacey Bailey split fifth and sixth in the long round in 7.8 seconds and Huffman went on to share four and fifth in the average after a time of 7.5 seconds in the short go.

SWOSU Rodeo returns to action on October 6-8 at the Southeastern Oklahoma State Rodeo in Durant.