SWOSU rushes out of Bethany with a win 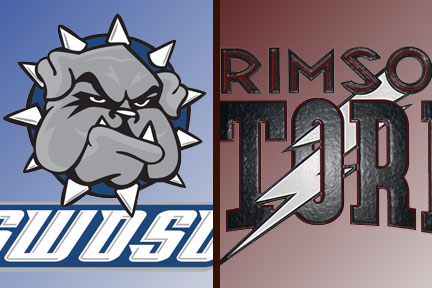 BETHANY – SWOSU Football defeated Southern Nazarene, 35-14, on a windy Saturday afternoon in Bethany. The Bulldogs scored at least one touchdown in every quarter, courtesy of a record-setting four Karltrell Henderson rushing touchdowns and a Marc Evans to D.J. Jones passing score.

The Crimson Storm opened up with the ball to start the game, but a prepared Dawg defense held SNU to a quick three-and-out to force a punt.

Beginning almost right at midfield, the Bulldogs went on a nine play, 51-yard drive consisting of three Evans passes of 13, 8, and 20 yards to push the ball down the field and power runs from Henderson in the red zone for the first touchdown of the game.

After the score, SNU quickly answered with a score of their own with a 60-yard strike through the air from quarterback Jacob Spady to Terence Olds, knotting the score back up at 7-7 with 7:54 left in the first quarter. SWOSU would punt on their next two possessions and deny SNU on a fourth down conversion, completing the scoring for the quarter.

To open the second quarter, Conner Bays forced a fumble that fell into Deric Robertson’s hands and was returned 14 yards to put the Bulldogs in the red zone threatening to immediately score. However, SWOSU couldn’t capitalize after failing to convert on a fourth and goal.

After the turnover, the Dawg defense once again stepped up to force another three-and-out and punt. At midfield, the Evans threw to Jones for 24 yards, and Henderson took it the rest of the way on four-straight rushes for his second score of the day to give SWOSU the 14-7 lead.

Both teams’ next drives were ended on fourth downs they couldn’t convert, followed by an SNU punt with 1:24 left before halftime allowing the Bulldogs one last chance to score before the break. Evans led the offense down the field in six plays, going 81 yards capped off by a 20-yard touchdown pass to Jones with almost no time remaining. At halftime, SWOSU led Southern Nazarene 21-7.

Out of the locker room, the SWOSU defense held firm but it was the Crimson Storm defense that got SNU back on the board in the third quarter. Doryan Harris jumped a route and took Evans’s pass 64 yards to the end zone for the 64 yard pick-six interception getting Southern Nazarene within one score at 21-14.

The SWOSU offense immediately responded, scoring a touchdown of their own after a nine play, 57-yard drive that utilized both running backs Kenneth Martey and Karltrell Henderson. It was Henderson who was able to score on an 11-yard run, making it his third rushing touchdown of the game.

In the ensuing drives, both teams again traded field position after fourth down punts, and SNU again was stuffed on a fourth down conversion attempt midway through the fourth quarter. After the defensive hold by the Dawgs, the offense took over with a mix of both passes and runs to move the ball 73 yards in nine plays to score the last touchdown of the game. It was none other than Henderson once again, bulldozing his way in from two yards out for his record-setting fourth score of the game with 6:31 left in the fourth quarter.

Neither team scored the rest of the way and the Bulldogs pulled out the win over SNU 35-14.

Henderson ended the game with 19 rushes for 119 yards and four touchdowns. Those four touchdowns were the most since Eric Royal scored four rushing touchdowns for the 1991 Bulldogs against New Mexico Highlands in NAIA competition.

Through the air, Evans completed 18 of his 31 passes for 192 yards and one touchdown with his only mistake on the day being a costly interception that resulted in a touchdown. His favorite target on the day was Jones with five grabs, one of them scores, and 63 yards total. JR Omigie also collected five receptions for 56 yards, with his longest grab of 20 yards on the day.

Defensively, Colton Wright led the Bulldogs on the day in tackles with nine followed closely by Clay Wilkerson with seven and a group of SWOSU players that tallied six over the course of the game.

Bays forced the lone turnover of the game for the Dawgs with Robertson scooping it up. The Bulldogs also stuffed Southern Nazarene on four fourth-down attempts throughout the game.

The win marks SWOSU’s third-consecutive victory, improving their record to 3-4 on the season, and 3-4 in Great American Conference play. The Bulldogs will host Oklahoma Baptist on Thursday, October 20 in Weatherford looking to push the win streak to four.