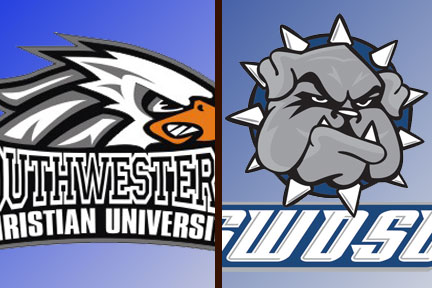 The Bulldogs came out firing from deep against the Eagles zone, knocking down 9-of-18 three-pointers in the opening half as they built a 40-27 lead at the break. The majority of the offensive power came from the bench in the early going as SWOSU got 24 bench points in the half, with Markeise Champion and Nick Shoemaker combining for 20 points early on.

SWOSU shared the ball as well have all season in finishing with a season-best 19 assists on 29 made baskets, including seven assists from Martell Collins, who also finished with 15 points and five rebounds. Champion led the Dawgs with 16 points, five assists and three steals as five different players reached double figures in scoring.

Shoemaker lived up to his billing as ‘Shot Maker’ by knocking down 4-of-7 attempts from deep for a career-high 12 points while Collin Jennings matched him with 12 points in 21 minutes of play. Luke Lewallen also set new career highs with 10 points and seven rebounds while playing a season-best 27 minutes in relief of Emeche Wells, who battled foul trouble all evening.

“I thought we really shared the ball well and our shooters stepped up and shot the ball with confidence,” Bulldog head coach Bob Battisti said following the win. “I was a little worried about our energy coming off two emotional conference road wins but our guys were invested tonight and they deserved to win.”

Winning has become the norm for SWOSU the past month as the Bulldogs have reeled off seven consecutive victories following a setback on opening night against Lindenwood. SWOSU now has their longest win streak in Battisti’s three-year tenure as head coach as the Dawgs improve to 7-1 on the year heading into a matchup with Panhandle State on Saturday afternoon.