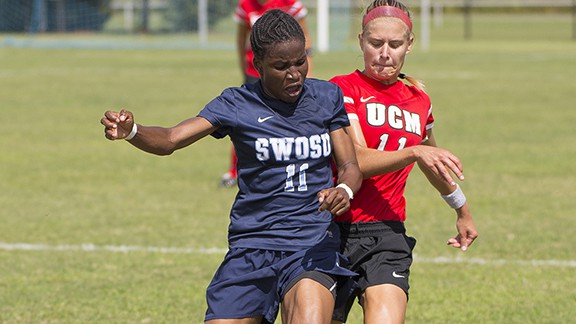 WEATHERFORD, Okla. – Three SWOSU Soccer standouts have been named to the Division II Conference Commissioners Association (D2CCA) All-Region Teams that were announced earlier today. Alimata Rabo was named the DWCCA Central Region Player of the Year as well as a First Team All-Region selection and was accompanied on the first team by Sandra Nabweteme, while Olivia Butler was awarded a second team selection.

Rabo, a redshirt freshman named to the first team, was the Great American Conference’s Offensive Player of the Year after scoring 22 goals in the regular season which ranked her tied for fourth in all of NCAA Division II in that category. This season Rabo was recognized three times by the GAC as Offensive Player of the Week and once by the National Soccer Coaches Association of American (NSCAA) as a Player of the Week on September 13, marking only the second time a Bulldog has been recognized by the organization. In addition to her goal scoring, she also ended the year tied with her teammate Nabweteme for both team and conference highs in goals, assists (9), and points (53).

Nabweteme, a freshman named to the first team, was named the GAC’s Freshman of the Year after scoring 19 goals in the regular season, which ranked her one spot behind Rabo in all of NCAA Division II. Nabweteme was honored as a GAC Offensive Player of the Week twice throughout the regular season and scored three of the five goals the Dawgs netted in the post season, which tied her with Rabo as the team leader in goals to conclude the season (22). She ended the 2016 season tied with Rabo in goals, assists, and points.

Butler, a junior, was SWOSU’s elected captain for the 2016 season. Despite missing seven games with a knee injury, Butler was still able to finish the season with three goals from the midfield position while adding four assists, ranking her third best on the team behind both Rabo and Nabweteme.

All three players listed above will return to the lineup next season for SWOSU, looking to build off a successful 2016 campaign. The Bulldogs finished the season 12-4-3 and advanced to the GAC Tournament Championship game before falling to Harding in eight rounds of penalty kicks.