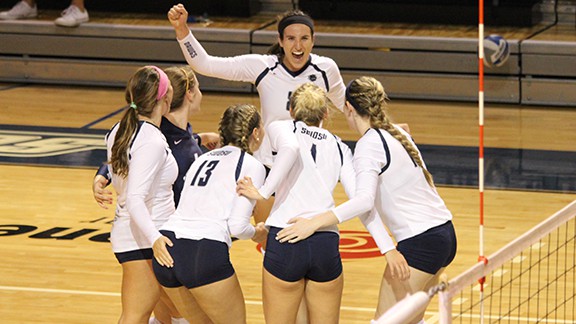 CANYON, Texas – Coming into Saturday, SWOSU Volleyball had faced national-power West Texas A&M 12 times and the Buffs came out on top in each of those matchups. That narrative has now changed after the Bulldogs went into West Texas A&M Fieldhouse – ‘The Box’ – and claimed a 3-1 (25-23, 19-25, 25-22, 25-23) victory over WT in their third match at the Buff Classic.

After struggling with slow starts during their first three matches of the weekend, SWOSU controlled the tempo in the early going on Saturday. The Bulldogs came out of the game swinging and Carly Zak got a pair of aces to help build a 12-5 lead in the first set. WT slowly made their way back and took a 21-20 lead, but an Addie Aman kill tied the set at 21-21 and started a three-point run that forced WT to call timeout. The Buffs would again tie things at 23-all, but an error by WT and a booming kill from Kelsi Schidtberger gave SWOSU the early lead with a 25-23 set win.

SWOSU had to battle the home-court advantage that comes at ‘The Box’ in the second set. The Bulldogs had their lowest hitting percentage (.129) of the match and just nine kills, allowing WT to tie the match at 1-1 with a 25-19 win.

The veteran Bulldog club showed resiliency in the third set, trailing by one or two for most of the set getting things tied up and taking an 18-17 lead with back-to-back kills from Carly Zak. Paige Holt and Zak had kills to extend to a 21-19 advantage and two bad sets from WT helped SWOSU gain some separation. Schmidtberger got the Dawgs to set point with a kill before Kayla Hebert went up for a sneak attack that landed in the middle of the Buffs to end the set at 25-22.

The fourth set was another grinder, with neither team leading by more than two points at any point. SWOSU made a three-point run with kills from Aman, Zak and Schmidberger that made it 18-16 and forced the Buffs to call timeout. SWOSU would not relinquish the lead, although WT tied the set twice at 21- and 22-all, and Hebert and Jill Green got the final points on kills and ended the match at 25-23.

Zak and Schmidtberger combined for 35 kills, with Zak accounting for 22 of those and surpassing the 1,200-kill milestone during the first set. Both players hit very effectively, with Zak scoring at a .288 clip and Schmidtberger hitting .370 with just three hitting errors.

Hebert finished one assist off of her career high with 52, moving into third place on SWOSU’s career assist list during the match. Kaitlyn Dillon established her career high with 17 digs, while Lindsey McCauley added 11, helping the Dawgs out-dig WT 59-to-50. SWOSU also had a close advantage at the net with eight blocks, led by Schmidtberger with four.

“It was great to come out and play at a high level today,” SWOSU Head Coach Josh Collins said. “We needed to know that we can compete at that level for an entire match against a very well-coached opponent like West Texas A&M. Now we just need to repeat that effort and level of focus more consistently.”