SWOSU volleyball home opener to be broadcast by Wright Wradio 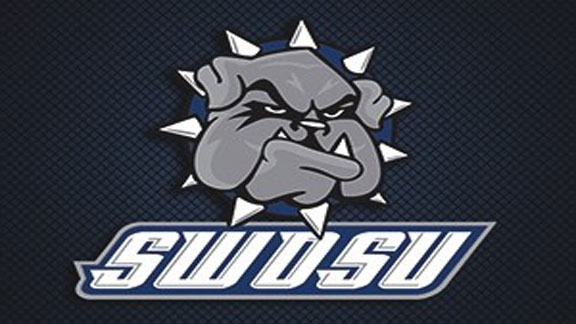 WEATHERFORD – Following eight road matches to open the season, the SWOSU Volleyball team will play their first match at the Pioneer Cellular Event Center in 2015 next Tuesday, September 22, against Southern Nazarene beginning at 7 pm.

The match will have an added spark, however, as Wright Wradio has announced plans to broadcast the game live on 95.5 HD2 ‘The Score’ and 1590 AM in the Weatherford area, making it the first match in SWOSU Volleyball history to be on the radio. Fans can tune in for pregame coverage beginning at 6:45 pm.

“We are really excited to broadcast this game,” KWEY Sports Director and ‘Voice of the Bulldogs’ John Liddle said. “When we put ‘The Score’ on the air around a year ago, the intention was that we could cover more local sports and this is a perfect chance to fulfill that expectation. If the fans can’t make it to the game on Tuesday, we’ll bring it right to them!”

Liddle will be on the call for the match alongside Joey McWilliams, the owner and operator of OklahomaSports.net, Oklahoma’s Premier College and High School Sports Site., as both Wright Wradio and OklahomaSports.net will be the corporate sponsors of the event. McWilliams is from Durant, but no stranger to the Great American Conference, where he is a regular contributor on the GAC Sports Network during championship broadcasts.

“OklahomaSports.Net is proud to be a sponsor for this match and I’m thrilled to have the opportunity to be in Weatherford for the event and to have the chance to work alongside the great John Liddle,” McWilliams said. “With both teams coming off sweeps in their first GAC competition of the year, it looks to be a great matchup as the first SWOSU Volleyball contest to be broadcast on the radio.”

SWOSU Volleyball is currently 4-3 (1-0 Great American Conference) heading into a match on Saturday against No. 19 Central Oklahoma. Tuesday’s match will pit two teams with an unblemished league record as Southern Nazarene is 4-5 (1-0 GAC) after defeating Southeastern Oklahoma State last night in Durant.

“The opportunity to play a game that will be broadcast live in the area is extremely exciting and we are so thankful that John and Joey will be on hand to call the match,” SWOSU Volleyball Coach Josh Collins said. “Both of them have been great supporters of our program and this would not be possible without their efforts. Anytime we play Southern Nazarene, the matches have a high level of intensity and I expect the same next Tuesday.”

Fans planning to attend the home opener are encouraged to wear blue as part of ‘Navy Night’ at the Pioneer Cellular Event Center. Admission to all SWOSU Volleyball matches is FREE with seating on a first-come, first-served basis. Among the promotions for the event will include the giveaway of an HD radio, courtesy of Wright Wradio.