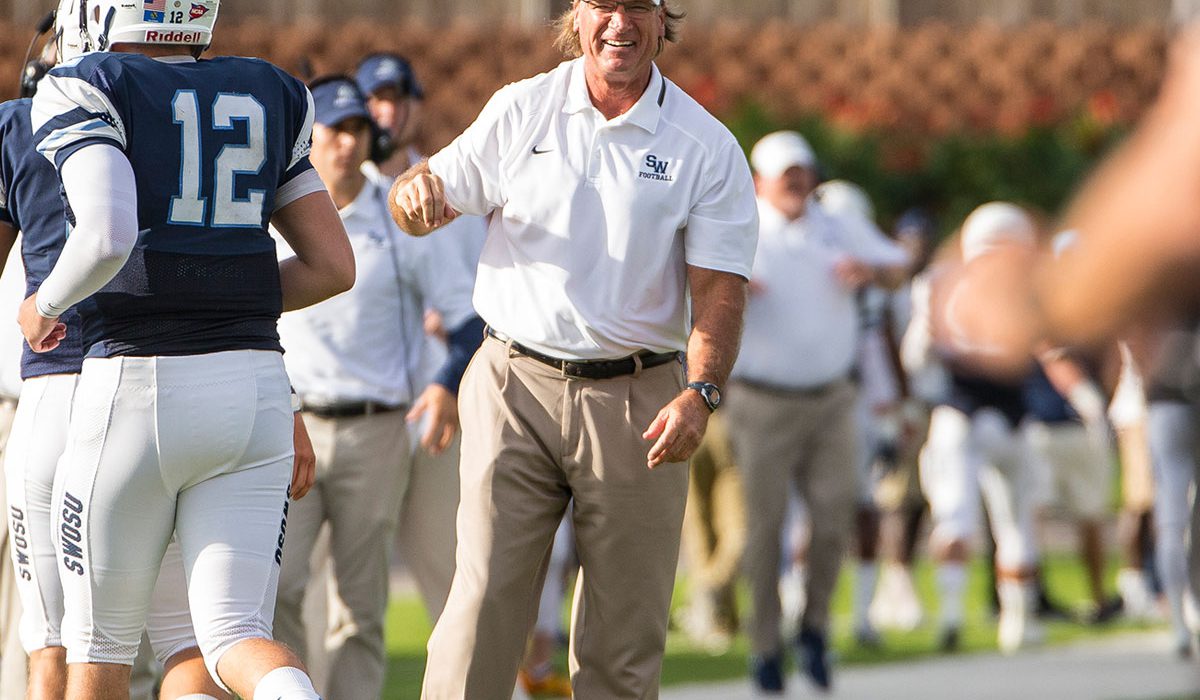 WEATHERFORD – SWOSU Head Football Coach Dan Cocannouer announced Friday his intentions to retire at the conclusion of the 2017 season, his ninth as the Bulldogs head coach.

“It’s been quite a privilege to coach at SWOSU, I think it’s a great place and it’s meant everything for me to be the head coach here for the past nine years,” Cocannouer said. “This was a tough decision because I’ve been coaching for 39 years, but the time is right for me to step aside. I love this university and I want to make sure that I leave it in a position where they can continue to build and keep getting better. One reason I want to announce this now instead of waiting is so they can work on getting another coach in here and started on recruiting once the season ends.

A two-time graduate of SWOSU, Cocannouer returned to his alma mater in 2009 to lead the Bulldog Football program. During his time in Weatherford, Cocannouer has led the Bulldogs to 35(6) wins, which ranks him fourth in SWOSU Football history for victories. He has coached six players that earned All-American status, one Academic All-American, eight all-region selections, one Great American Conference Defensive Player of the year, one GAC Freshman of the Year and 66 players who have reached all-conference status.

Cocannouer led the Bulldogs during their final two seasons as a member of the Lone Star Conference and then through the transition to the Great American Conference from 2011-present. SWOSU has had two winning seasons under Cocannouer’s watch, going 6-5 in 2013 before a breakthrough season in 2015 as the Bulldogs finished 8-4 and earned a berth to the Live United Texarkana Bowl – the program’s first postseason game as an NCAA Division II institution and just the eighth postseason game in Bulldog Football’s 109-year history.

The 2015 season was one of resilience for the Bulldogs as a team and Cocannouer personally following the loss of his wife, Jeri Lyn Cocannouer, just days before the team reported for training camp. SWOSU got off to a slow start that season, but bounced back from a 2-3 start to win six straight games and earn the Great American Conference’s automatic berth to the Live United Texarkana Bowl, where they met their long-time rivals from Central Oklahoma. The breakthrough season came with accolades as Cocannouer was named the Great American Conference Coach of the Year and the American Football Coaches Association (AFCA) Region 4 Coach of the Year after leading the Bulldogs to a five-win turnaround and second-place finish in the GAC after being picked to finish seventh.

“One thing that I always say is there are reasons the good Lord put you in certain situations,” Cocannouer said of that 2015 season. “If I would have been anywhere else, I don’t think I would have been able to take care of my wife as well, but the support the SWOSU family allowed me to stay with her those last few months. Then two days after the funeral we opened fall camp and football saved me that year. I don’t know what I would have done if I wouldn’t have been coaching, but being out there with those players and those coaches got me through it and that has a special place in my heart. SWOSU Football saved my life that year.”

The resume for Cocannouer added a significant honor in the spring of 2015 as it was announced that he would be inducted into the Oklahoma Coaches Association (OCA) Hall of Fame as part of the Class of 2015. He was one of 13 inductees from across the state of Oklahoma to be selected for induction following his storied coaching career at the prep level.

Cocannouer spent 25 seasons as a high school head coach in the state of Oklahoma, establishing a reputation as one of the most prominent and well-respected coaching leaders in the state. He came to SWOSU following an eight-year stint at Edmond Santa Fe High School, where he compiled a 70-26 record and led the Wolves to the Class 6A Finals in 2003. He led five different schools to the state playoffs and served on the Oklahoma Football Coaches Association (OFCA) Advisory Board for several years and he is a past President of the OCA and the OFCA.

“Since returning to SWOSU in 2009, Dan Cocannouer has meant a great deal to this university,” SWOSU President Randy Beutler said. “I would like to commend Coach Cocannouer for the quality of student-athletes that he and his staff have brought to SWOSU to wear the blue and white over the past nine years. He continues to enrich the learning experience for our student-athletes and runs a well-respected football program that our campus, community, alumni and fans can be proud of.”

Cocannouer played at SWOSU from 1974-77 under legendary head coach Otis Delaporte, helping the Bulldogs to conference titles in 1974 and 1977. He was a senior leader on the Bulldog team that won a school-record 11 games and finished as the NAIA National Runner-up in 1997 after playing in the Apple Bowl at the Seattle Kingdome. By returning to lead his alma mater, he became the first SWOSU graduate to lead the Bulldogs since Joe Metcalf did the same from 1952-57.

“There is no greater ambassador for Southwestern Oklahoma State University than Dan Cocannouer,” SWOSU Athletic Director Todd Thurman said. “It’s impossible to put into words the impact that Coach Cocannouer has had on our football program, the athletic department and the university as a whole. His enthusiasm and love for SWOSU is contagious to all of those who have had the privilege of working with him. We certainly wish Dan nothing but the best in retirement and thank him for his years of loyalty and service to Southwestern Oklahoma State University.”

Thurman has announced that a national search for the next SWOSU Head Football Coach will begin once the 2017 season concludes.