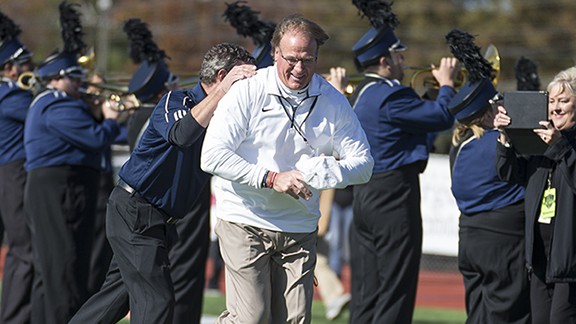 OKLAHOMA CITY – SWOSU Head Football Coach Dan Cocannouer has been selected as the 2016 recipient of the Merv Johnson Integrity in College Coaching Award, given by the Oklahoma Chapter of the National Football Foundation and College Hall of Fame.

Cocannouer will be recognized at the 32nd Annual All-Sports and Scholar-Athlete Awards Luncheon, to be held on Thursday, June 16 at the Oklahoma Sports Hall of Fame and Jim Thorpe Museum in Oklahoma City. In 2003, Merv Johnson was the initial recipient of the award, which chooses an esteemed football coach from any level in Oklahoma, recognizing them for their outstanding careers as coaches, educators and community leaders.

Since returning to his alma mater prior to the 2009 season, Cocannouer has led the Bulldogs to 29 victories, a mark that ranks him seventh on the school’s all-time wins list. SWOSU is coming off their best season of the NCAA era, as Cocannouer directed the team to an 8-4 record in 2015 and a second-place finish in the Great American Conference standings. For their efforts, SWOSU was selected to represent the GAC in the Live United Texarkana Bowl, the program’s first NCAA postseason game and just the eighth in Bulldog football’s 107-year history.

Cocannouer was named the GAC Coach of the Year and the American Football Coaches Association (AFCA) Region 4 Coach of the Year in 2015. Prior to the season, he was inducted into the Oklahoma Coaches Association (OCA) Hall of Fame for a storied prep coaching career that included stops at Altus, Walters, Comanche, Pauls Valley, Alva, Chandler, John Marshall and Edmond Santa Fe. He played at SWOSU from 1974-77 under legendary head coach Otis Delaporte and was a member of conference championship teams in 1974 and 1977.

“I’m very humbled and honored to be accepting the Merv Johnson Integrity Award,” Cocannouer said. “I’ve known Merv for many, many years and he’s so well-respected throughout the country so to get an award like this in his name is a big-time honor and I’m very humbled by it.”

Merv Johnson, the man for whom the award is named, is the Director of Football Operations at the University of Oklahoma. Johnson is in his 36th season at Oklahoma, which also includes 19 years as an assistant coach and he has coached for over 50 years at schools including Missouri, Arkansas and Notre Dame. During his football journeys, he has helped produce 19 All-Americans, coached on staffs that have won four National Championships and he was inducted into the Oklahoma Coaches Association Hall of Fame in 2002.