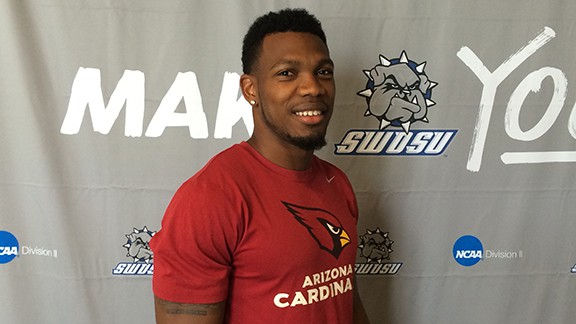 WEATHERFORD, Okla. – Less than one week after signing as an undrafted free agent with the Arizona Cardinals, former SWOSU cornerback Trevon Hartfield reported to rookie minicamp on May 6th. He stayed in Phoenix with his professional team until returning to his native Oklahoma on June 24th to prepare for his first NFL Training Camp.

Hartfield received a month off before training camp after spending the previous seven weeks in Arizona going through rookie minicamp, organized team activities, minicamp and offseason workouts. He has spent the past two weeks training in Weatherford with SWOSU Strength & Conditioning Coach Jared Jackson, working out with former teammates and studying his playbook for a return to the desert on July 24th, leading up to the start of Training Camp on July 28th.

“The biggest thing is just going in there and controlling what you can control,” Hartfield said about his mindset heading into training camp. “You have to go in there with an open mind, realizing that a spot is available. They wouldn’t have brought you to camp if they didn’t think you could play, so you have to do what you’re capable of and everything else will take care of itself.”

In Arizona, Hartfield will join the reigning NFC West champions, who came up one game shy of a Super Bowl bid after being defeated by the Carolina Panthers in the NFC Championship Game. He will train alongside veteran NFL standouts including Patrick Peterson and Tyrann Mathieu for four weeks in hopes of joining the Cardinals for the regular season. Hartfield mentions the speed of the game, both mentally and physically, as some of his biggest challenges in preparing for a professional career.

“The biggest thing is the change from being a college football player to becoming a professional,” Hartfield said. “The schemes are more complex, in-depth and you have to get used to this being your job. The professional side of everything presents a learning curve, but I’ve been figuring that stuff out pretty quick.”

The level of training he received at SWOSU has helped Hartfield stay ahead in the game while making his pro transition. He credits the SWOSU Football coaching staff, along with Jackson for getting him ready to play at the next level, which is one of the reasons he returned to Weatherford to train while trying to get the right mix of relaxing and training before reporting to camp.

“I think it’s helped tremendously,” Hartfield said of his training at SWOSU. “The coaching staff, starting with Coach (Dan) Cocannouer and on down to the defensive coaches and Coach Jackson, have prepared me well and I can’t thank them enough for all that they’ve done for me.”

The Arizona Cardinals currently list 11 cornerbacks on their roster, including Hartfield, and those players will be competing to make the 53-man roster at the conclusion of camp. He will take the field for the first time as a professional on Friday, August 12th, when the Cardinals host the Oakland Raiders at the University of Phoenix Stadium.