Table is set for success at Bacone 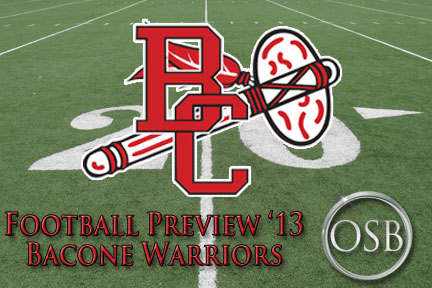 There is stability in Muskogee of late.  And it comes in the form of the coaching staff at Bacone.

Trevor Rubly is now in his third season at the helm for the Warriors and not a single member of his staff is new to the program this season.  Rubly has been in process of dispelling the idea that Bacone is just a stop along the coaching journey.

“It’s something that we were trying to change,” Rubly said.  “There has been kind of a carousel going around at Bacone.  And we feel as coaches that it is good for our student athletes to have some consistency and some familiar faces in the program to build that base they can trust.

“And I’ve found a good group of guys that kind of wanted to start something and to stick it out and see where we could take it.  And that’s what we’ve done so far.”

The Warriors were 6-3 in 2012 and had five-game winning streak near the end of the schedule.

“We did finish strong last year, and I think we set the table for this year,” Rubly said.  “We had a disappointing end against McMurry.  We had a chance to go to the playoffs for the first time in history and we fell one game short.

“But the kids saw the success and they got a little taste of it.”

And Rubly said he believes that his team’s progress, along with recent recruits and his steady staff have put this program in a position to achieve.
“This year the table is set for us and hopefully we’ll come out and perform the way we can.  And we’ll be a team that should be force to be reckoned with.”

Of course, the decision of which players will take the field first for the Warriors in 2013 is yet to be made.

“We draw a line in the sand after each year and say that the job is open and let every kid know that your job isn’t safe.”

And the battles for position in the offseason and in camp have been fierce.

Take the most visible position of quarterback.  Bacone returns a senior in Kyle Kuban, who started last season for the Warrior, completing 52 percent of his passes for more than 1,100 yards.  Kuban’s spot is being fought by fellow senior Karl Birkenfield, who played spottingly in 2012, but is having a good summer.

Whoever comes out on top will have some quality receivers to throw to, and will be in the backfield with someone who is filling some big shoes.

“We brought in some really good receivers and have a lot of transfers that are looking good,” Rubly said.

“We lost Tyler Thomas, offensive player of the conference last year.  But we have a couple of good backs competing for that job as well.”

The competition is just as spirited on the defense.

And this was a defense that led the NAIA with four sacks per game.

“We did lose one guy, our middle linebacker.  We’ve done a great job recruiting linebackers.  I think it’s the best linebacker crew that we’ve had since I’ve been here.  We have some guys that are lights out.”

And Rubly didn’t back away from a newcomer to his defensive line.

“We didn’t lose anybody on the inside of our line, but we put a tag on recruiting defense ends and we got a guy who is a D-I transfer from Sam Houston State in Preston Sanders.”

Sanders has been giving the Warrior offense fits and Rubly is ready to unleash him on opponents.

Bacone came in at the No. 27 spot in the first NAIA preseason poll and Rubly knows that his team is in the mix.

Bacone also was picked second in the Central States Football League, grabbing three of the nine first-place votes.  Rubly also noted that his team has to get past one foe in particular – the team picked to win the CSFL – Langston.

“I think that it’s fair that they are number one.  The three years that I’ve been here, we haven’t beaten them yet.

“And we’ve played them tough a couple of years, but we’ve just got to get over that hump.  But they have to come to Bacone this year.”

Rubly also noted the significance of the game being played in Muskogee.

“We were 5-0 at home last year and we’re going to try to keep that going.  We have six games at home this year that we’re really excited about.”

And that big matchup with the Lions is set for Nov. 9.

But Rubly is preparing his team to succeed week by week.

“We’re glad that the table is set for us, but we’ve got to take one game at a time and try to get victories.

“The rest will take care of itself.”