Taking a Look at Coaching 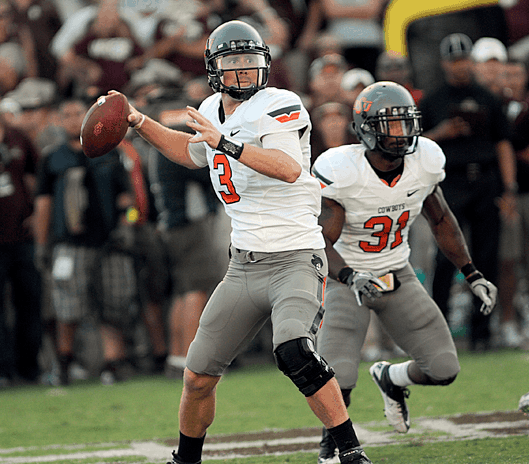 Bedlam is only a few short days away and OSB wanted to take a look at the role coaching will play in this year’s match up.  Mike Gundy goes into this game having never beaten Bob Stoops.  Is this the year he finally knocks off the Sooners as the head coach of the OSU Cowboys?  Stoops has had Gundy’s number in Bedlam.  Even last year when the Cowboys were at home with Dana Holgerson’s high powered offense, Stoops unveiled his 3-4 defense and took the Cowboys by suprise.  It proved to be enough to keep the Cowboy offense from running away with it and in the end the Sooners pulled out the victory.

Who can forget seeing Bob Stoops sitting in the stands last year during pre-game reading a magazine.  The only other time I’ve seen him that relaxed was before this year’s Texas game when he was sitting on the bench before the game making it out to be his own personal recliner.  We all know how those two games turned out.  So if you see a pre-game shot of Stoops relaxing it usually means good things for the Sooners.

The key this year for OSU is to give Weeden plenty of time to throw the football.  If Gundy and the Cowboys can put together a game plan that keeps the pressure off of Weeden, then this could make for a long day for a Sooners’ secondary that has been torched this year.  You know the Sooners will be looking for creative ways to get sacks and create pressure.  It will start out as a chess match and this could be the year Gundy finally wins one in Bedlam. Until that time, I’ve got to give the edge to the Sooners.