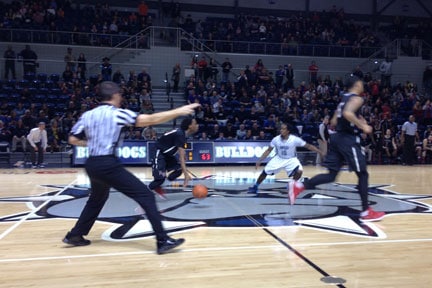 But anyone who expected anything less than a contest that went to the wire doesn’t know about rivalry games.

T’aries Taylor hit a running jumper from falling away to the right as time expired to give the Rangers a 67-66 victory and stunning the home crowd in the Bulldogs’ new home.

Taylor had only five points on the night, but these included two of the most important of his career.

The win was big for his team and his coach as well.

The difference hovered around that mark until Southwestern (11-5, 8-2 GAC) made its charge back with eight minutes left.  Trailing 57-50, the Bulldogs scored seven straight and with the score tied set the stage for the epic finish.

Northwestern retook the advantage 59-57, which was followed by a 25-foot jumper from Trent Washington.  Washington was fouled on the shot and converted on the four-point play opportunity to give SWOSU its first lead, 61-59, since early in the game.

In the game’s final minute, each basket looked to be a game-winner.  Rod Camphor put the Bulldogs on top 64-63 with 31 seconds left, but the Rangers quickly came back down and Bruce Wright put it off the glass and put his team back up just nine ticks later.

Wright had a game high 21 points.

Fouled on the other end, Michael Bradley, who was 8 of 10 from the free throw line on the night, calmly drained two and SWOSU was back on top.

But with nine seconds left, Taylor took the ball down the court and made his move in time to get the shot away just before the buzzer sounded.  Nothing but net.

His team pulled off the fantastic and heart-pumping win, but Brown said he knows it was a tough battle.

“They have a really good team,” Brown said.  “They keep coming back at you and they have unbelievable playmakers. The second half I just didn’t think we did a very good job defending them.

“It comes down to individual guys making some really tough plays and we did that down the stretch.”

It was a rowdy environment in the new facility, but Brown said his boys would not be deterred.

“We knew that this was going to come down to having a hero step up. You just don’t come in here and win by 10 or 12.

“And our guys stayed together.   And that’s a battle we’ve been fighting all year – to stay as one.  And we’re heading in that direction.”