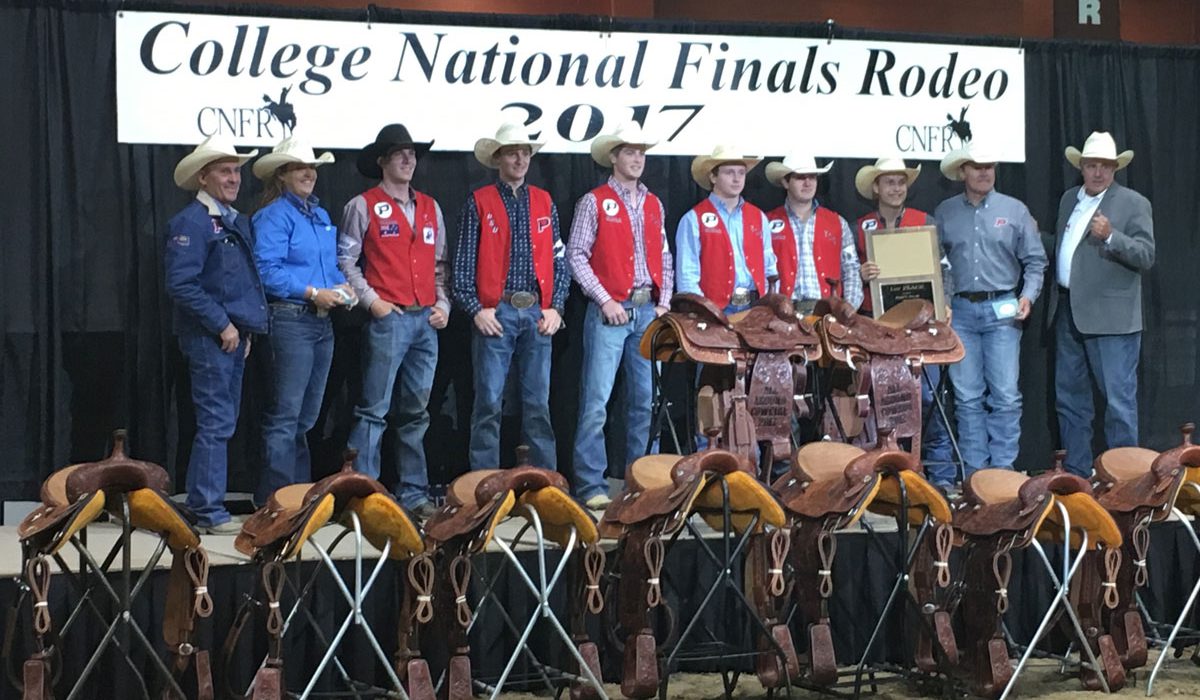 It was a team effort all week long at the 2017 College National Finals Rodeo (CNFR) for the Panhandle State Men's Rodeo team as they secured their sixth national title. (Courtesy photo)

CASPER, Wyo. — Rodeo is often thought of as an individual sport, but for collegiate rodeo action, team performance becomes critical. Oklahoma Panhandle State University has excelled in both aspects and this year’s edition of the College National Finals Rodeo (CNFR) in Casper, Wyo. was no exception as they will bring home yet another National Men’s Team Championship.

“This win is for everyone at the university past, present, and future. It takes the entire campus, their family and friends, and our community to make these young people successful. This is a win for everyone involved,” said Dr. Tim Faltyn, President of Panhandle State.

Faltyn is especially proud of the student-athletes. “The best part is these kids won with class and grit. I feel blessed to have been there and see our students make history. They made us all proud. Both Robert and Sue Etbauer along with Shelbie Weeder work so hard do a great job, I am so happy for them.”

“That ride felt great. I was really glad to draw a good horse. It is important to have good horses under you up here,” Martin said of his second-place finish in the first round.

He kept the tempo going strong to start the short round for the Aggies with a 74.5-point ride. Combined with his scores from earlier in the week, Martin secured sixth place in the national standings and accumulated valuable points for his team.

Panhandle State is expected to earn points in the classic event of rodeo with its rich saddle bronc riding tradition. The lone saddle bronc rider to qualify for this year’s CNFR was no stranger to the big stage, but after coming down before the 8-second whistle in the first round, Jake Finlay’s plans changed.

“I think that’s what got me a round win,” Finlay said about bucking off his first horse in Casper. “I sure as heck wasn’t going to let the next two get away from me and it motivated me a lot in the next two rounds.”

That motivation fired Finlay’s spur stroke in the third round where he scored 79.5 points to claim the top spot and secure his position in the short round. When the dust settled, the Australian cowboy placed fourth in the nation.

Moving to the timed event end of the arena, the Johnsrud brothers were the sole cowboys to represent the red and blue with ropes in hand. They proved Panhandle State produces top caliber athletes in all facets of rodeo with a fast time of 5.4 seconds in the second round to take home the championship rings in that round.

“We had a pretty good steer and I hit the start perfectly,” Ben Johnsrud said of the duo’s second run in Casper. “I felt like we could have been faster, but I couldn’t get the rope out of my hand. Nate [Johnsrud] roped him fast and it felt like the easiest run out of all of them this week.”

After a five-second penalty in the championship round, the brothers landed in sixth place overall.

“It was pretty fun to rope with my brother on this big of stage because I have been roping with him my whole life,” Nate Johnsrud said.

As the team kept tallying points in each of their respective events, all eyes were on the bucking chutes as the final curtain fell on the 2017-edition of the CNFR. Two Panhandle State cowboys qualified for the short go in the bull riding. Cody Ballard started his week with a bang by winning the first round with an 81.5-point ride.

“It always feels good to get the first one rode in the bull riding and it gives you confidence in the next three rounds,” Ballard said.

That confidence propelled Ballard to a 72.5-point mark in the second round of action. Unfortunately, he was not able to make the whistle on his final two bulls of the week, but still placed third in the nation and helped scoot his team to the top of the leaderboard.

Josh Frost is no stranger to the yellow chutes of the CNFR. The recent Panhandle State graduate was able to cover his bulls in the second and third round to qualify for the championship performance. Although Frost fell short of the required eight seconds in the final round, the Utah-native placed seventh overall.

“Panhandle has been a big part of my life both with my education and rodeo. It’s just a great place to be,” Frost said.

“The kids all did good – every one of them, boys and girls,” Coach Robert Etbauer said. “They all got points and gave us a heck of an opportunity.”

On the women’s side, Randi Buchanan rounded out a dominating collegiate rodeo career at Panhandle State by qualifying for the short go in the breakaway roping. Buchanan’s combined time of 8.9 seconds on three head was fast enough to secure eighth place.

“Being a part of the OPSU Rodeo Team wasn’t even really being a part of a team. They were my family. I was successful in my career because I have a family who are my teammates who were there for me, coaches who pushed me and believed in me,” said the out-going senior.

Buchanan also competed in the barrel racing where she was joined by teammate Melanie Roman who finished in the top 20 of the event.

“I couldn’t have asked for a better ending for my first year of coaching,” said Assistant Coach Shelbie Weeder. “We will go home, work hard and hopefully qualify a men’s and women’s team next year and eventually add a women’s team title to the list. Working with Robert [Etbauer] is going really well. We feed off each other and see everything from a different angle which gives us the opportunity to have a different take on things.”

Five of the seven men representing Panhandle State at this year’s CNFR will be returning in the fall, meaning the red and blue vests will continue to be a force in both the Central Plains Region and on the national platform.

“It’s hard to believe it’s over,” Coach Etbauer said. “We will be home Monday morning getting ready for next year.”