The best is saved for last for Vorwald – twice 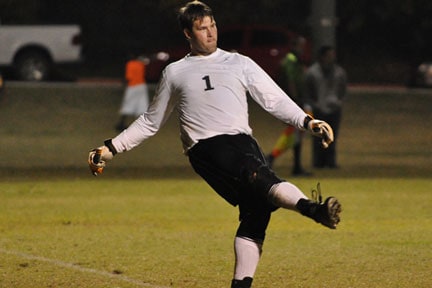 It stands to reason that a college athlete would want to grow and develop through his four- or five-year journey at his school.  To see the fruit of his labor mature and that each year would yield more success.

Working hard each year, he would want his time would be culminated with the most success in his final season.

That is what is happening for Brock Vorwarld.

The two-sport star from Norman is in his final campaign on the basketball court for St. Gregory’s after completing a great run as the goalkeeper for the Cavs’ soccer team.

And Vorwald has been enjoying his senior year.

“Yeah, it’s pretty good,” Vorwald said.  “We had a very successful soccer season.  The best since I’ve been here.  And basketball, obviously, we’re 11-1 right now.  We couldn’t be doing much better.”

“We had a few rough losses early on in the conference, but we won three of our last four, which allowed us to play in the (Sooner Athletic Conference) tournament.  Once you got to the tournament, everything reset.

“We rallied together to beat Wayland and Texas Wesleyan and things just kept going our way.  It was a tough loss in the final, but it was fun to be a part of the tournament and the postseason.”

The Cavs won five of their final seven games, including the win over 12th ranked Wayland Baptist and closing the season in the SAC Tournament final against 17th ranked USAO.  Vorwald had 73 saves on the year.

He also racked up individual honors for his work along the way.  In November, he was named the NAIA National Defensive Player of the Week – an honor he earned the same week teammate Stephen Cummins captured the same recognition on offense.

Additionally, Vorwald was recognized as a Daktronics-NAIA Scholar-Athlete.  It was the fourth such honor for the senior, who has a 3.83 GPA in biomedical sciences.

The prowess of his mind is similar to that of his physical frame.  The goalkeeper is 6-foot-6 and weighs in at 260.

An imposing figure in goal, to say the least.

“I’m kind of an unorthodox goalkeeper,” Vorwald said.  “You don’t typically see someone as big as I am.

“Professionally, you’ll find goalkeepers that are my height, but not necessarily my weight.  Normally they’re much skinnier.”

He has always played in goal and his stature has an impact, but it’s also a strength.

“I’ve been told by multiple people that it is intimidating being this big.

“One of my best things in goal is catching crosses and high balls, any free kicks.  My teammates would all tell you that’s my best feature – I’m very good in the air.  I might sacrifice a little quickness on the ground, but I have my own style, I guess.”

Upon completion of his undergraduate degree, Vorwald is hoping to extend his training.  He is applying to medical schools and is looking to go into health care in some form next year.

But his athletic career didn’t end in November.  He simply changed uniforms.

Vorwald is having a solid season on the basketball court this year, too. Oddly, his individual numbers don’t look as good similar numbers did last year.

It’s been a team effort for the Cavs’ basketball team, now 11-1 and 2-1 in the SAC.  With imports this season and returnees stepping up their games, SGU won its first eight contests.  The team has already compiled more victories than in any other season since Vorwald has been on campus, who is ready as the Christmas break is ending to get the SAC slate going.

“It will be interesting and I feel confident about it,” Vorwald said.  “I feel like we’re doing really well.  It will be exciting to get into conference play with two games a week.  It will be good to get our legs back under us and get into the flow of things.”

The two-sport star had options coming out of high school.  But he wound up in Shawnee because he was afforded the opportunity to be a two-sport star.

“Really, I was planning on only playing basketball when I came in.  Our coach, Andrew Rundell, I had played against him in club play throughout high school.

“One of the good things about coming to St. Greg’s is that Coach (John) Martin said that if I was going to come here to play basketball, I can try out for soccer as well.  And it worked out perfectly.  This is my fifth year and I’ve loved every bit of it.”

Even two sports is a bit of a limitation for Vorwald.  He played more as he was growing up.

“My parents had me playing everything when I was growing up.  I had to make a decision once high school started to play either soccer or baseball.  I broke my thumb, which kept me from playing baseball, and I went the soccer route.  And I’ve always played basketball.”

“And technically, I’m on the golf team here, but I haven’t participated in any tournaments.  Once basketball season is over, hopefully I’ll get to play in a couple of tournaments.”

The proximity to home for the 2009 Norman High School graduate also played into Vorwald’s choice of St. Gregory’s.

“I was born in Norman and have lived there my whole life,” Vorwald said.  “My parents come to pretty much every home game we have, every home game, being only 40 minutes away from Shawnee.  And away games within the state, normally they’re there and even some out-of-state games.

“Being close to home was a big factor.  My mom loves watching me play soccer, but her favorite sport is baseball.  And she still is upset sometimes that I didn’t go through with baseball.  But I just enjoy soccer more and I’ve had a great time doing both and I’ve been very fortunate to be able to do both in college.

“Many of my friends go to OU and I’m still able to see them and being close to my parents has been great.”

Even though his friends are important to him, Vorwald took his own path.

“I wasn’t planning on playing sports when I came out of high school.  I was thinking, ‘All my friends are going to OU.  I’m going to go to St. Greg’s for a year and if I don’t like it, I’ll just go back and hang out with my friends and give up on sports.’

“But I met some great people away from home and have tons of friends.  I met my fiancé here.

“Even if you don’t get to go to a D-I school or a higher-level college, in NAIA I had a great time.  I have so many friends that could have gone on to play sports in college, and they decided not to.

“Maybe that was the best decision for them, but I’m so happy that I decided to go through and continue my sports as long as I can.  I feel like it’s something that I would have regretted if I had given it up right out of high school.”

And his favorite moment in soccer came in his final season.

“The most heart-warming moment was when we beat Wayland in the first round of the playoffs.  They were a very good team and they were all over us the whole game – they defended us like crazy.  My teammate Stephen (Cummins) made the goal there with about five minutes left.

“I had never had such a great feeling with that ball going in and sitting on that win.”

And his best moment on the basketball court may be still yet to come.