The Game Starts When? 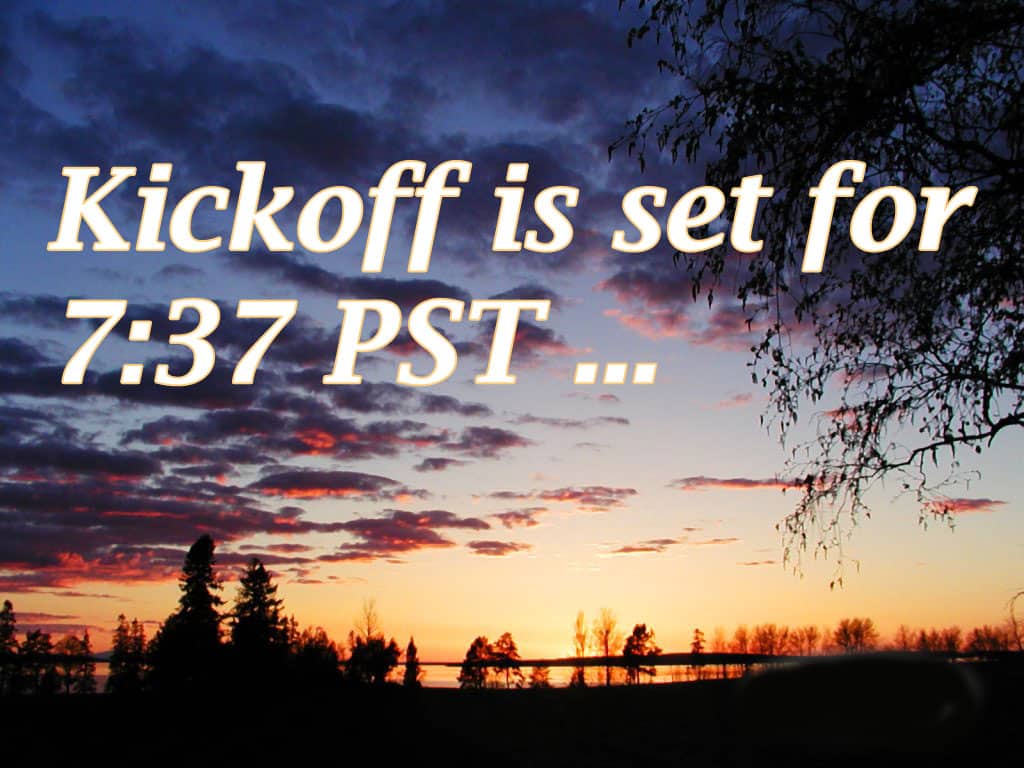 Friday night, I found myself watching TV at around 11:45.  Although the other five people in the house had gone to sleep – and I’m not entirely sure of the veracity of that statement because I have two high school aged daughters who never seem to go to sleep in the post meridian – I guess I just wasn’t tired yet.

I was waiting to go to the high school and pick up my oldest daughter, who was coming back home with the band from the football team’s long road trip.  I knew they would be back late and I wanted to get some rest before I had to get back up in the middle of the night and go pick her up.  But my mind was just too restless.  So I turned on the television and caught some of the Missouri/Arizona State game.

It was a great contest.  Mizzou picked up 14 points in the fourth to send the game to overtime, before ultimately losing it in the desert.

And somewhere in that overtime stretch, it hit me.  I might have to get used to this!

Missouri represented a team from the Heartlands going out west through two time zones to take on a Pac-12 team.

All signs are pointing to my little world of the Central Time Zone (standard or daylight, it doesn’t matter) being thrown around and subjugated to television dictates and power brokering among university administrators in strategic places.

It now seems very likely that Oklahoma and Oklahoma State will be taking up residence in the Pac-(fill in the blank here) Conference, or Pac-X for the purposes of this columnist’s whims.

While I do understand that folks in the Eastern Time Zone have been dealing with this sports-watching schedule for decades, I believe that’s fine for them.  This is just one of many reasons I live here and not there.

I’m also frustrated for the fans that enjoy traveling throughout the Midwest to attend games and be a part of rivalries that have endured generations.  No, I haven’t been able to take all of my kids throughout the Big 12 yet, but I would have liked to. (Incidentally, taking five children to Walmart is an adventure, much less Columbia, Mo.)

Now, not all games will be set up to play at times that during the week are reserved for Letterman and Leno.  If a top ten ranked Sooners or Cowboys team is playing, it will often get a prime watching space on the schedule.  Savvy businesses like ESPN and Fox understand that.  I expect to see many of these games while I’m still awake enough to enjoy it.

But there will be trips to Pullman, Wash., or Corvallis, Ore., that will not make the cut.  I’m just preparing for those.

And this column doesn’t even begin to go into what a Pac-X basketball schedule could give me in terms of watching hoops.  Although, I suppose it would help with family time because the kids wouldn’t be competing with basketball for Daddy’s attention.  Not that this ever happens…

Times change and I suppose in many instances we have to change as well.  But it doesn’t mean I have to like it.  It does make me sad that a conference like the Big 12, with traditional-rich universities like Nebraska, Texas, Oklahoma, Oklahoma State, Kansas, Missouri… just couldn’t keep things together.

I’ll start getting ready for by practicing with the Oklahoma State/Tulsa game that starts on Saturday night at 9:10 CDT.  9:10!  And these are two teams that are both actually in the state of Oklahoma!  There is truly a price to be paid for national exposure.

And notice that I’m not blaming money for this downfall.  Too many people blame money for so many of societal problems.  Because really, it’s ultimately not the money.

It’s the love of money.